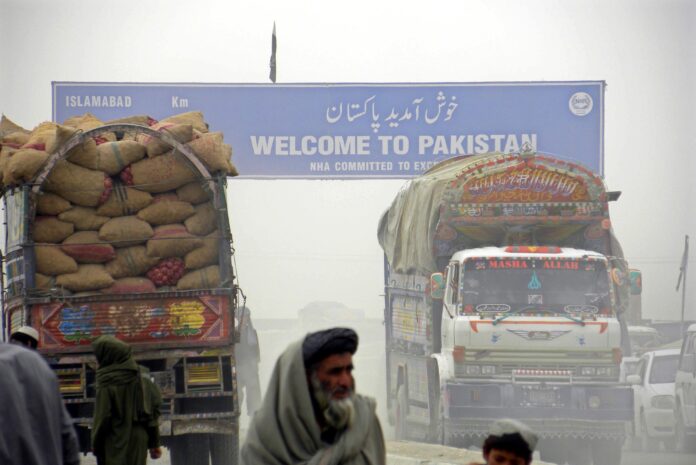 PESHAWAR: Despite the announcement by the Finance Minister Shaukat Tarin, the State Bank of Pakistan (SBP) has yet to issue a notification over doing trade with Afghanistan in Pakistani rupees.

In this regard, Zia-ul-Haq Sarhadi, newly elected vice-president of the Pak-Afghan Joint Chamber of Commerce and Industry (PAJCCI) on Saturday said business communities on both sides of the border are suffering since due to the government’s failure to implement its announcements regarding Pak-Afghan trade, stressing that effective measures must be taken to boost trade with Afghanistan and Central Asian Republics (CARs).

PAJCCI Chairman Zubair Motiwala, said that bilateral trade between Pakistan and Afghanistan has already dropped by 50 per cent as trade in Afghan currency is impossible at the moment because of the neighbouring country’s current security and financial condition while trade in US dollar in not suitable for traders due to the current economic situation of Pakistan.
There are countless opportunities for Pakistani businessmen in rebuilding the war-riddled Afghanistan. The traders believe that by allowing bilateral trade in Pakistani rupees, the country would be in a position to overcome the current trade deficit.
Sarhadi informed that exports volume to Afghanistan and Central Asia was harmed after the federal government and the State Bank of Pakistan cut off exports to these countries in Pakistani rupees.
He said that Afghanistan has been a war-torn country for many years and now its banking system is non-functional which has badly affected the export of cement, steel, edible oil, rice, medicines and foodstuffs from Pakistan to Afghanistan has reduced.
|
The banking system in Afghanistan was weak, the law and order situation was deteriorated, so it was the only country from which certified payments and receipts through banking channels were not necessary for trade, but now this facility has been withdrawn, which has hampered trade with Afghanistan.
He said that the volume of bilateral trade between Pakistan and Afghanistan which was $2.5 billion five years ago is now less than $600 million and as a result of current policies and measures, bilateral trade and transit trade is now reduced to zero
Sarhadi demanded that Prime Minister Imran Khan, Finance Minister Shaukat Tarin, Trade Adviser Abdul Razzak Dawood, SBP governor, federal secretary Commerce, and director Exchange Policy to take notice of the situation, urging them to immediately issue a notification for trade with Afghanistan in Pakistani rupees ton revive bilateral trade.
- Advertisement -
Facebook
Twitter
Linkedin
WhatsApp
Email
Previous articlePakistan to enhance bartering trade with China
Next articlePakistan becomes 4G smartphone exporter