Pakistan’s Bookme.pk raises $7.5m in Series-A round amid plans to launch in Myanmar market 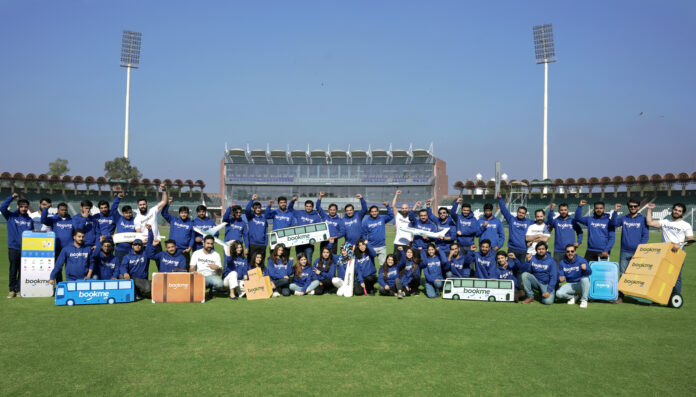 LAHORE: Lahore-based Bookme.pk announced today that it has closed a $7.5 million Series-A funding round for its digital ticketing platform, as the startup eyes expansion into the Myanmar market.

The round was co-led by Pakistan-based Zayn Capital, Lakson Investments Venture Capital (LIVC) which is the seed investor of the company, and UAE-based Hayaat Global. The round was also joined by MENA-based BY Ventures and Jabbar Internet Group, New York-based Millville Opportunities Funds Investment, and Silicon-Valley based Mentor’s Fund.

Profit has successfully verified the funding amount and can confirm that the amount raised in the Series-A round was $7.5 million.

Launched in 2014 by Faizan Aslam, Bookme provides online ticketing service for leading bus service providers like QConnect, Daewoo Express and Skyways and leading cinema houses. The startup has a main presence in ticketing for bus travel.

Road transport grew at 6.2% per annum between 1991 and 2016, more than the average GDP growth rate of 4.4% for the same duration, according to a Karandaaz report. Road transport segment continuously increased until 2020 when the pandemic hit but has visibly picked up. Prospects of growth for Bookme in the bus ticketing segment, which is its niche and forms the bulk of its customer base and revenue, are strong as travelling resumes and infrastructure development under the Pakistan China Economic Corridor (CPEC) improves road connectivity.

The startup, however, can expect another brief halt in travel if the threat of the new ‘Omicron’ variant of the Covid-19 disease grows and governments push for restrictions again.

Among ticketing for cinemas, airlines and hotels, Bookme was recently selected as an exclusive ticketing partner for the Pakistan Super League (PSL) under a contract with the Pakistan Cricket Board (PCB). The PCB moved to digital ticketing to curb the spread of Covid-19 infection during the tournament.

Under the contract with PCB, Bookme has exclusive digital ticketing rights for all cricket matches in Pakistan until 2023.

Where’s the money going to be spent?

In its early days, Bookme planned to launch ticketing service in Myanmar besides Pakistan but retreated because according to Bookme CEO and founder Faizan Aslam, the Myanmar market required hefty spends which the company did not then have at that stage. It could have been either Pakistan or Myanmar with the restricted budget the company had as a new startup.

Now, with the new funding, Bookme is composed to hit the Myanmar market again. “We would like to develop a similar ticketing ecosystem in other markets as we have in Pakistan. The conditions for such investment in Myanmar are conducive right now,” Faizan says.

In Pakistan, Bookme’s footprint has remained behind the curve in smaller cities where intercity road travel happens through smaller vehicles like vans, but in a paper-based ticketing environment, says Faizan. The startup plans to digitise ticketing for travelling via such fleets.

In major cities where big bus services like Skyways dominate, Bookme digitised these providers by providing them software for digitising tickets at the terminals first without any cost, and then connecting that system for online booking through Bookme website and application. This is also what Faizan considers because of which competitors at least in the bus segment would have a hard time breaking in.

“We digitised the paper-based transport and travel sector in Pakistan to create a plug and play distribution system that interconnects reservation systems of intercity buses, domestic & international airlines, hotels and events. In our view, making the overall experience cashless through APIs to enable Super App payment applications was an integral part of completing the digital experience,” said Faizan Aslam.

Meanwhile, Bookme plans to increase its market share as road travel grows further by aggressive marketing. Bookme makes money by charging a commission to bus service providers against the tickets sold via its platform.

Building on its presence in the bus transportation segment, Bookme plans to launch cargo services. Under its plans, customers would be able to send cargo packages through buses Bookme works with.

“The vertical had been in the works for a long time now but we did not have the spend for required infrastructure and marketing. But we have had the cargo vertical in the pipeline for some time now and we will be moving aggressively towards cargo delivery service with the new funding,” says Faizan.

Moreover, Bookme, which claims to be the first completely cashless ticketing platform in Pakistan to have the highest number of day-to-day digital transactions for banks and payment gateways, also plans to enable microlending through a telecommunications company.

It claims to have data on 6 million customers which booked tickets on its platform and plans to make its data repository available to a leading telco in Pakistan (name not disclosed) to enable the telco to offer its customers microlending and buy-now pay later (BNPL) services. The telco would be leveraging historical data and spending patterns of Bookme’s data, providing them data points for assessing credit worthiness of customers to provide them microlending and BNPL services.

“We are thrilled to continue to invest in Bookme and firmly believe that the Series A funding will allow Bookme to expand its operations, increase its market share and transform the travel and ticketing space in the country,” said Babar Lakhani, managing partner at LIVC.

“We have followed Bookme’s journey from the seed stage to see it scale into one of the leading platforms in Pakistan. We’re extremely proud to be a continued part of their journey as we believe that this team is capable of building a Unicorn,” said Faisal Aftab co-founder and managing partner of Zayn Capital.

“BookMe has one of the most robust e-ticketing platforms because of its focused
approach and customer-centricity,” said Mohammed Ikhlaq, director of Hayaat Global SFO
DMCC. “Under Faizan’s inspired leadership, this stellar team has shown its market nous with unique, compelling offerings and partnerships that have supercharged its trajectory. We are delighted to play a role in their growth story and plans, and we fully expect them to continue scaling new peaks as the digital economy deepens in Pakistan,” he added.