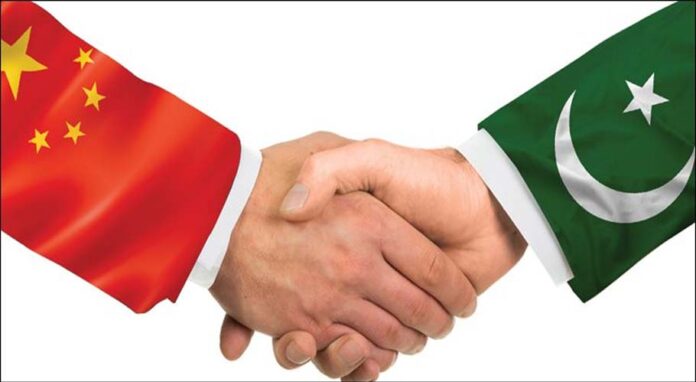 In his opening remarks, Federal Minister for Economic Affairs Omar Ayub Khan commended the government of China for hosting the JEC after a long gap of eleven years and expressed his satisfaction at the successful seventy-year bilateral friendship between Pakistan and China.

To highlight the significance of the event, Omar Ayub referred to the bilateral agreement for the establishment of the JEC, signed in 1982, and called it the basis of bilateral cooperation between the two countries.

During the committee meeting, the minister highlighted that Pakistan and China are entering into the next phase of CPEC wherein Special Economic Zones (SEZs) are being established. “The SEZs would be helpful in attracting foreign direct investment (FDI), establishing industrial units, creating employment opportunities and boosting economic activities in the country,” he said.

“Similarly, the operationalisation of Gwadar Port will also create momentum in external trade,” he added.

China has been Pakistan’s largest trading partner for six consecutive years since 2015. At present, China is Pakistan’s main source of imports and second-largest export destination.

The Economic Affairs minister further highlighted that Pakistan has immense investment opportunities in various sectors. “Pakistan provides a conducive and liberal investment environment to foreign investors and entrepreneurs. All foreign investments are fully protected under Foreign Private Investment Promotion & Protection Act, 1976, and Protection of Economic Reforms Act, 1992. Now, SEZs are being established to meet global challenges of competitiveness with state-of-the-art infrastructure and connectivity,” he stated.

Omar explained that the SEZ incentive package includes a ten-year exemption from income tax and a one-time exemption from all Customs duties and taxes on the import of capital goods.

He added that textile, leather, pharmaceutical and surgical industries of Pakistan are considered as best in the world and that products manufactured by these sectors are exported around the globe.

“Accordingly, Chinese investors can benefit from the huge potential of Pakistan’s industrial sector. In this regard, Small & Medium Enterprises Development Authority (SMEDA) and the Board of Investment (BOI) can collaborate with Chinese counterparts for enhancing cooperation in the industrial sector,” he further added.

He also emphasised the importance of the agriculture sector for food security and rural development, inviting China for mutual cooperation in the areas of agricultural research, enhanced productivity, value addition and food processing through establishment of joint ventures (JVs) and business-to-business (B2B) contacts.

Furthermore, both sides also discussed matters related to development projects in energy, infrastructure and social sectors, agreeing to promote investment and industrial cooperation in these specific areas on a fast track basis. In addition, strengthening of cooperation under multilateral framework was also discussed.

EAD Secretary Mian Asad Hayaud Din, while speaking at the occasion, shared his views regarding the promotion of bilateral trade cooperation, exchange of experience in the context of poverty alleviation, establishment of joint working groups.

In his concluding remarks, Vice Minister of China Ren Hongbin commented that the discussions on bilateral economic relations between delegates will meet the objectives of deepening bilateral relationship between the two countries.

He also hoped that the next session of Pak-China JEC will be held soon in Pakistan.