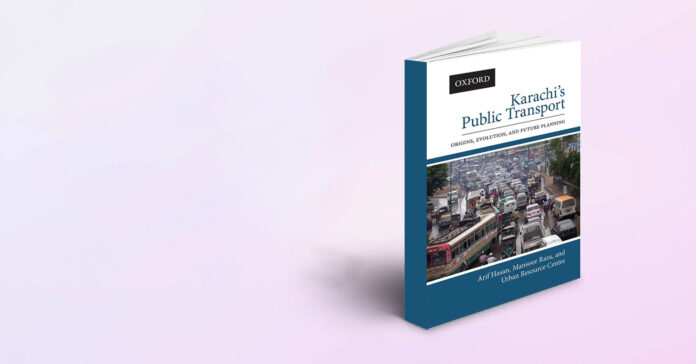 The state of Karachi’s public transport system, or the lack thereof, has been a topic of national conversation for decades now. Every year there is some new solution proposed and every year some other solution of equally grand proportions is scrapped.

The lamentable absence of any real public transport system in the country’s largest metropolis, let alone the absence of a robust one, is the topic of Asif Hasan and Mansoor Raza’s titled ‘Karachi’s Public Transport: Origins, Evolution and Future Planning.’ Despite its deceptively simple title, the book takes on the Herculean task of picking up the history of public transport in Karachi, and identifying a number of factors that have contributed  to the failing of a complex system meant to pull together a sprawling city of 20 million strong.

Together, the two writers bring a vast range of expertise that allows them to analyse the city in what can only be described as an exercise in urban-transit cartography. Arif Hasan, an architect, planner, activist, researcher, and teacher, has to his name multiple publications on urban and rural development. Among other contributions to eminent projects like Orangi Pilot Project and Asian Coalition for Housing Rights, Bangkok, he is the founding Chairperson of Urban Resource Centre, a non-profit organisation which focuses on highlighting public issues. Meanwhile Mansoor Raza,  an electrical engineer, environmentalist and urban planner that is currently  a lecturer at the Department of Architecture and Planning, NED University of Engineering and Technology, brings to the book years of experience serving as a research supervisor on the Green Line (BRT), Lyari expressway, and other transportation projects.

With their unique set of skills and different perspectives, the two authors manage to construct a narrative that includes all stakeholders, from the government officials who are responsible for maintaining public transport to civilians who are reluctant to use the city’s overhead bridges. The authors discuss Karachi’s evolving demographic, it’s growth in population, changes in family structure, and consequent changes in lifestyle habits, as factors that affect the city’s demand for public transport. There were many interventions proposed and even taken, that end up falling short of this demand either because of political tensions, beaureucratic incompetency, and a number of reasons that are presented in this book.

The book begins with a discussion on Karachi’s public transport’s history, touching upon the fate of the tramway line that connected the city and Karachi Circular Railway (KCR) which ran a full circumference of 44 km until the city outgrew it. Then, there was the introduction of the minivans, the buses that fell out of order, the qingci that was outlawed, followed by the birth of app-operated ride-hailing services like Uber and Careem, and the pending BRT plans that have been delayed over a decade. The authors go into an analysis of each development in the public transport sphere and every intervention that came along, giving reasons for its success or failure. They also give us behind the scene glimpses into entities like the transport mafia that are also responsible for how Karachi’s public transport operates.

The book brings together some illuminating statistics regarding Karachi’s growth in terms of demographic as well as vehicular network. For instance, out of Karachi’s population of 16 million (the book highlights that this figure is contested by experts who claim that the true estimate is above 20 million) 68 per cent belong to the low-income group and 62 per cent live in informally developed settlements. This is also the populace that is largely dependent on the public transport for their livelihoods but at the same time, they are among the most disadvantaged when it comes to accessibility. The authors describe how with time Karachi’s peripheral areas have expanded outwards and moved away from city centres where work, commercial, and educational facilities are concentrated. This results in the city’s less privileged having to travel longer distances and spending a larger chunk of their income on commuting. Another figure that stood out was that in July 2018, 61% of all registered vehicles in Karachi were motorbikes. This percentage continues to increase. Motorbikes have been identified as one of the biggest reasons for road congestion and accidents. Weak law enforcement and corrupt police practices mean that safety regulations like wearing helmets are not enforced, increasing risks for bikers and their passengers.

The book is sectioned into specific, detailed overviews of the different transport projects that were attempted again and again but were largely unsuccessful. This includes government projects, public-private partnership coalitions, and private company interventions like the present-day implementation of app-based ride hailing services. What is interesting is how the authors chose to study each project through a consideration of contextually grounded realities. This means that the book brings forth issues of rapid population growth, an evolving demographic with changing travel patterns and preferences, widening economic inequalities, Karachi’s complex political landscape, ethnic tensions, the lack of civic sense, environmental hazards posed from the rotting transport system, among other factors.

For instance, the book presents the inefficient performance of public buses as not only a problem of weak governance but associates it to the wider issue of gender inequality. Women reported being more vulnerable to safety hazards and harassment within buses, and finding the walk to and from bus stops and inconvenience. Similarly, when describing the gap in the market that more recent ride-hailing services such as Uber, Careem, Paxi etc. managed to close, the authors do not miss pointing out that this may pose a larger issue of excluding the low-income groups. This will not only come to be through the naturally manifesting class-driven, lifestyle differences but also appear as a practical issue when the more privileged civilians’ income will be directed towards the private companies instead of public transport services.

The book includes real stories extracted from interviews of members from each stakeholder’s group. This includes the experiences, knowledge, and opinions of a car mechanic, a traffic police officer, rickshaw driver, female passengers and the like. It is through these stories that we learn about the struggles most people face in their daily lives, where transport issues threaten people’s livelihoods and literal lives as well. We also learn about specific issues that may not be commonly known to everyone like the troubles of facing extortion just for running a taxi service and the ‘cutting’ business of selling stolen scars to scrapyards.

A separate chapter is assigned just for women’s issues and their stories that highlights them as one of the most disadvantaged groups in terms of accessibility to transport. The final chapter then gives recommendations based on the results of a plethora of existing research and the study conducted for the development of this book. It proposes solutions for better governance of the transport system, possible interventions to address the worsening environmental pollution hazards and commentary on existing structures such as the disused pedestrian bridges and ongoing BRT plans.

The book deserves attention because of its evaluation of the seemingly unsolvable problem in an appreciably holistic manner. Any solution to the transport issue will not work unless we are thinking about the women who need safety throughout the day, or the police officers that are resorting to bribery and extortion owing to less pay, or the public transport owners who are failing to provide quality services at lower set fares.The book also proposes, and rightly so, that the civilians and private parties that have been involved in running Karachi’s existing public transport system like rickshaw drivers, bus operators, and transport lenders, have valuable knowledge regarding the city’s transportation set-up and should be included in administrative decisions. One hopes that an awareness of the multiple complexities that intertwine with Karachi’s haphazard roads can help reach effective solutions.

Fact check: Google is not suspending Play Store in Pakistan but users won’t be able to pay...