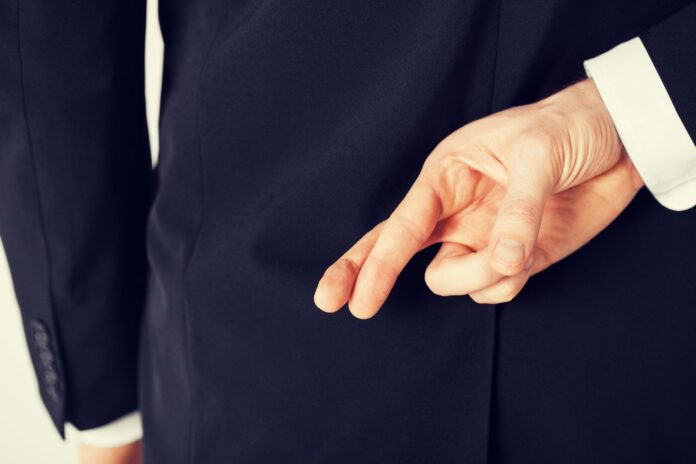 “A lie can run round the world before the truth has got its boots on.”- Terry Pratchett

Organizations have to constantly deal with a myriad of problems and challenges that inhibit their potential to grow. Issues such as lack of vision, flawed business strategy and poor customer service have led to the fall of several organizations throughout history.

Whilst it is true that organizations may suffer from different problems due to their unique set of circumstances, there are certain issues that are almost universal across various corporations in different industries. It is rare to find any organization that does not suffer from ‘corporate lies’.

Corporate lies have a dark history of causing chaos in organizations and serving as the root cause of organizational decline. A quite recent example of a major corporation engaging in this practice is that of Volkswagen. It was found that they had implemented softwares to misrepresent the contaminating impact of their engines on the environment in their supposedly environment-friendly cars.

This led to Volkswagen encountering a significant backlash that forced their CEO to resign and suffering from legal actions that amounted to penalties of $9.5 million. As this example shows, corporate lies have the power to damage the credibility of organizations significantly by creating a negative perception in how various stakeholders look at the entity.

Despite this reality, corporate lies occur in organizations on a daily basis. The prominence for this practice can be explained by some key factors. Individuals, at all levels of the hierarchy, do not want to expose their inadequacies and want to give the impression that they are competent. Individuals want to ensure that they maintain a positive image in the minds of their co-workers and this often results in them hiding their errors through dubious means. Moreover, competition between employees may result in situations where individuals place greater emphasis on their own career progress at the expense of the organization. This leads to individuals often engaging in subtle lies to either undercut their fellow employees or misrepresent the true scale of their contributions. Additionally, certain employees are afraid of triggering conflicts and upsetting others. Their emotional attachment to a particular project may lead them to lie to others in order to avoid causing them disappointment if the project is not going well. Despite these factors having a strong influence on individuals to engage in corporate lies, organizations are wary of the destructive impact that it may have on the organization at multiple levels and want to take substantial measures to effectively handle this issue.

Organizations can explore several avenues to tackle corporate lies. One of the most important elements is the development of a culture of honesty, fairness from the top management that will trickle down the organization. This is crucial to provide employees with the confidence that being honest will serve as a key basis for their success in an organization. The emphasis on fairness will ensure that people are rewarded for their work on merit and this would help in creating a positive organizational culture based on honesty as employees will be incentivized to not only to work hard to show their value to the organization, but also to stay away from practices such as corporate lies that may lead to them being viewed negatively.

Another avenue is the presence of strong internal processes and procedures that tackle such lies firmly. This can be done in different ways such as having a strong policy against corporate lies in the company manual. This can help organizations to create examples out of employees that engage in lies by holding them accountable and ensuring that there is a greater level of transparency within the organization. Employees are also likely to engage in lies, in particular, when they have to achieve unrealistic goals and deal with extremely tight deadlines. Therefore, it is important that organizations focus on the well-being of employees by managing their workload in a better fashion through setting realistic targets that would help to maintain a healthier workforce that is less likely to engage in unethical behavior.

Furthemore, organizations can employ various policies to deal with corporate lies. These can vary from providing regular training to employees on corporate ethics to the presence of a compliance culture where employees are regularly informed about the boundaries between right and wrong. Another common tactic is the presence of a well managed whistle-blowing policy which would enable the organization to better identify corporate lies and deal with them in a more private manner. These are just some examples of ways organizations can employ to reduce the negative impact of corporate lies and provide a healthy working environment to its employees.

Having a strong course of action against corporate lies is a key determinant of an organization’s success and whilst it is nearly impossible  to completely remove them, organizations throughout the world have generally improved in this domain. This has helped not just well-renowned companies, but also startups and small companies to become more successful across different regions of the world. However, despite these improvements globally, organizations in Pakistan still suffer significantly from this issue. Organizations in Pakistan have found it difficult to take serious action against the presence of corporate lies in light of certain factors. Usually, employees tend to develop biases towards certain groups of people that they do not like and this often leads to the creation of factions within organizations that are competing against one another for their own interests. This dynamic fosters the growth of corporate lies as groups try to misrepresent each other for their goals and this often results in a difficult working environment.

Moreover, the ‘boss’ culture is very much prevalent in Pakistan, which allows a few individuals that wield significant power to use corporate lies for their own benefit, knowing that they will not be opposed. A typical example of this is how ‘bosses’ castigate those employees that have differing opinions from them and are often not allowed to reach their potential as their reputations take a significant hit from lies which are spread by ‘bosses’ that cannot be easily challenged. One of the most common breeding grounds for corporate lies is when employees decide to leave organizations. Whether it is supervisors, managers or fellow team members, people tend to cast a negative light on those that decide to leave the organization. This often leads to departing employees being labeled negatively through baseless claims that only leads to an uncomfortable environment for the particular employee. Such baseless claims and lies are often employed to maintain a positive image of the company in front of the workforce and change their perception of the departing employee.

Corporate lies lead to significant repercussions for organizations in Pakistan.  Undoubtedly, organizations suffer from a poor culture where there is less trust and absence of strong working relationships between employees which often inhibit the potential of what a corporation can do. Moreover, as employees are often dragged down by ‘bosses’ through this tactic, organizations are unable to develop leaders within the organization, which makes it difficult for inhouse succession and leads to a greater reliance on a policy of acquisition of external talent. This can be deflating for the existing workforce who may choose to leave and also makes the organization a less attractive option for new talent that fear that their growth would be stunted. Moreover, ‘bosses’, who use such unethical tactics to manipulate various stakeholders towards their line of thinking, lead to the loss of human capital and poor decisions that damage the long-term prospects of the organization.

Throughout my 25-year banking career, I have been fortunate enough to see how dealing effectively with corporate lies impacts organizations. I have worked in several senior positions over the past two and a half decades, with big names such as Bank Alfalah, Habib Metro Bank, and Dubai Islamic Bank, where I’ve witnessed time and time again, how strong cultures were created by managements that focused on taking strict actions against corporate lies, and investing in the development of young talent so that they may eventually become leaders at these institutions. The development of talent at such organizations, and the rise of these companies, were undoubtedly linked to how a culture of honesty and accountability was fostered and maintained over the years. It is imperative that Pakistani organizations also focus on developing similar capabilities to deal with corporate lies, and the following quote from the great Michael Jackson sums up why organizations need to take this matter seriously: “Lies run sprints, but the truth runs marathons.”