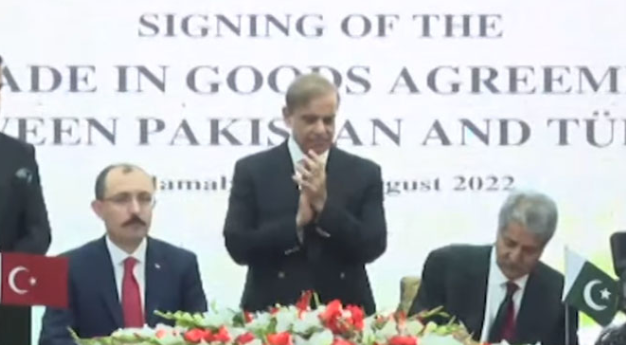 ISLAMABAD: Pakistan and Turkey on Friday signed the Preferential Trade Agreement (PTA) aimed at boosting trade in goods between the two countries.

In this regard, Turkish Trade Minister Dr Mehmet Mus and Minister for Commerce Syed Naveed Qamar signed the accord in the presence of Prime Minister Shehbaz Sharif at the agreement signing ceremony held at the PM’s Office in Islamabad.

The PTA includes comprehensive provisions on bilateral safeguards, balance of payment exceptions, dispute settlement, and periodic review of the agreement.

A key highlights of trade concessions under the agreement includes concessions for Pakistan on 261 Tariff Lines, which include key items of the country’s export interest to Istanbul from the agricultural and industrial sectors.

Concessions on these items will provide local exporters better market access compared to competitors such as India, China, Vietnam, and Malaysia.

Furthermore, rules of Origin incorporated in the agreement are similar to the ones that Pakistan is already complying with EU’s Rules of Origin under the GSP+ regime.

On the other hand, Pakistan has offered Turkiye concessions in 130 Tariff Lines.

It is pertinent to mention here that the Turkish Request List was for 300 items; however, Pakistan has kept 170 items in the sensitive list to protect the domestic industry.

Addressing the ceremony, PM Shehbaz Sharif termed the agreement “a great moment and a milestone” in the brotherly and historic relations between Pakistan and Turkey.

“This has been a subject of discussion for past many years and finally it has been achieved due to untiring efforts of both sides,” he said, while appreciating the vision and leadership of Turkiye President Tayyip Erdogan.

He said the Trade in Goods Pact would open new vistas of opportunities for both countries given that their “potential is unlimited and capacity is beyond anyone’s imagination.”

Separately in a tweet, the PM said that the agreement will be central in achieving the initial trade target of $5 billion.

Signing of Trade in Goods Agreement between Pakistan & Turkey today will open up vistas of opportunities. This Agreement will be pivotal in achieving the initial trade target of $5 billion. There is an unlimited potential for bilateral trade. Let the world know we mean business.

Earlier, Turkish Trade Minister Dr Mehmet MUS on Thursday arrived in Pakistan for signing the agreement. A release by the Ministry of Commerce had said that Federal Minister for Commerce Syed Naveed Qamar received him at the airport.

Before this, ten rounds of negotiations on the Free Trade Agreement have been held between the two countries.