The lost glory of I. I Chundrigar Road 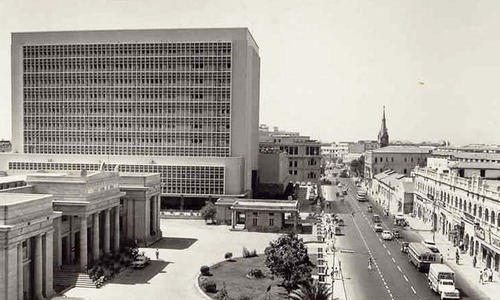 If you’re over 35 and have a job in Karachi, chances are you’ve spent a significant amount of time at I.I Chundrigar road. For some, that may be because your offices were located there. For others, you might have been caught up in traffic. Both are likely scenarios on this once mighty avenue that is the central business district not just of Karachi but of Pakistan.

The road is inextricably tied to the world of finance. There is prestige and recognition associated with its name, but its current state of dilapidation means it is no longer a desired office location. That, to put it mildly, is sad. For a road with a legacy to fall into disrepair is one thing. That is fixable. For it to become undesirable is another can of worms entirely.

Profit itself has had very particular rules about how the road is treated in our writing. This publication’s former Managing Editor, Farooq Tirmizi, insisted we refer to Chundrigar by its old name, McLeod Road. The road was initially named in honor of John McLeod, the Deputy Collector of Customs in Karachi during the 1850s.

{Note from the editorial staff: In addition to this, I.I. Chundrigar road holds another unique position in Profit’s style-sheet. Anytime a road is mentioned in a story, the city that this road is in must be mentioned. For example, if Ferozpur Road is being mentioned, it has to be written as ‘Ferozpur Road, Lahore. The only two exceptions to this rule? I.I Chundrigar road in Karachi and Constitution Avenue in Islamabad.}

There is another story about the road’s origins however. Some think it was named after James John McLeod Innes, a Lieutenant General that had received the Victoria Cross (the highest and most prestigious award of the British honors system) for his ‘services’ during the War of Independence 1857. Considering the British respect for the subcontinent, it seems more likely that a British war hero is a muse behind the name of the road.

What started from cotton warehouses, a cotton exchange, railway tracks, and a station; in the 1870s eventually turned into a hub of commercial activity with a number of European banks and companies setting up shop along the street. What this means is, that Chundrigar Road was of utmost importance even before Pakistan was conceived.

The train station proved to be pivotal in the growth of the road. In 1935, McLeod station was set up which helped businessmen and employees commute; but also helped goods make their way from the port to their destination. The station has now been renamed Karachi City Railway Station.

In 1969, the road was renamed Ibrahim Ismail Chundrigar Road. Chundrigar was the sixth prime minister of Pakistan and served for a period of just 55 days (an interesting fact is that isn’t the shortest tenure for a Pakistani PM, Shujaat Hussain and Nurul Amin served for 54 and 13 days respectively).

All this just tells you just how important the road has been for not just decades, but centuries. Walking down the road you cannot help but see the amalgam of different eras just by observing the architecture. On one hand, you’ll find the flashy modern UBL building, you’ll find the classing HBL plaza, and you’ll also find relics of the British Raj such as the Standard Chartered Office.

Despite all this, Chundrigar has lost its charm. No one wants to be there anymore. It is just too much work to be there. For starters, the traffic is a nightmare. Back when the road was made, the number of vehicles out there was limited. However, in the absence of decent public transportation, what other option does one have than to take their car to work?

You can spend a good half hour just making your way from one end of Chundrigar to the other during peak hours. This is because there are just not enough tracks to offset the large amounts of traffic.

The road, however, has also been vastly ignored. Remember the charpai beds you see outdoors or in your villages? The charpai threads are used to demarcate the two sides of traffic. That is the state of the road that brings in more money than most districts.

The parking situation is another issue that cannot be ignored. Offices just aren’t built keeping the number of cars employees bring in mind. You’ll find cars parked on the sidewalks, alleys, anywhere you can fit one. It is a lucrative business in the area. Parking itself starts at Rs 5,000 a month. This gives you somewhat of an idea of how big of an issue it potentially is.

However, these issues exacerbate when it rains. You know how they say, it never rains – it pours? Well, that is how one describes rain at Chundrigar. It is one of the first roads to flood in the city. You’d think this means ankle depth, or maybe even knee deep, but in 2022 the water levels at Chundrigar road reached 5 feet. For context, I am 5 feet 5 inches. The situation was so bad, that floatable boats were brought in to save people and prevent them from being electrocuted from the walls of buildings that had caught the electric current.

This is why no one wants to work at Chundrigar anymore, the same way no one truly wants to live in Karachi – it takes a toll on you and leaves you drained. While it used to be a hub of financial professionals considering all banks, the central bank and the PSX were lined on the road; it also housed all major media houses such as Jung, Geo, Dawn, Express, ARY, etc.

For this very reason, a number of offices have moved off of Chundrigar. HBL, while keeping the HBL plaza has set up an office at teen talwar where the executives sit, primarily to avoid traffic. Similarly, banks have now realized that you do not have to have your headquarters at Chundrigar anymore. Physical proximity to the State Bank of Pakistan (SBP) is no longer needed in today’s digital world. That’s why banks have set up offices all over the city.

Now you may be wondering where everyone is going. There is no new Chundrigar road in the making. Businesses and corporations are not lining up on the same road anymore. However, a key recipient of all this traffic from Chundrigar is the Harbor Front, Dolmen Executive Towers, and Sky Towers all in the same compound as the Dolmen City Mall.

While it may not be logistically convenient to commute to work all the way across town for many, the fact that you do not have to deal with a clogged road, troublesome parking, or worry about drowning makes any place seem better.

This however begs the question, will Chundrigar Road ever regain its lost charisma and charm? Will I ever be able to invite someone to Profit’s office without them saying, “Oh no, not Chundrigar; let’s meet somewhere else”? Will anyone care about its historical and cultural significance? Will anyone finally care about the employee lugging his or her way to the exhaustive location?

And more importantly, if this is the concern for the road that accounts for a major commercial activity, one must wonder whether anything is truly ever cherished or valued.