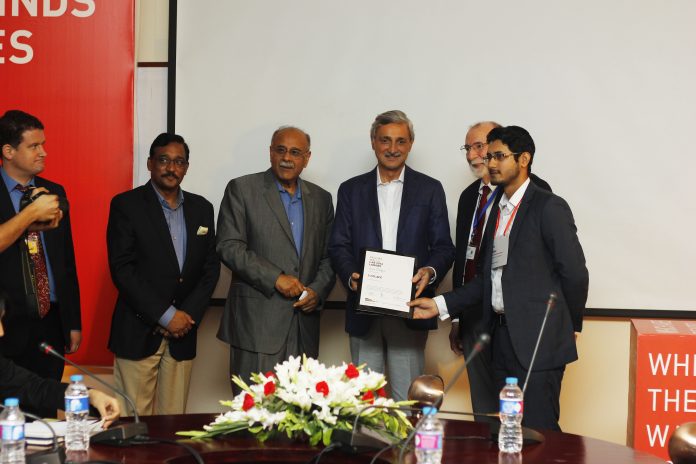 Awais Shafique misses his IELTS exam, travels to Lahore and wins a ticket to Berlin

A record number of 128 participants applied for the competition from all over Pakistan, out of which 25 were shortlisted for presenting their ideas. This was the third highest number of registrations worldwide in the history of Falling Walls Lab according to Naveed Syed of Falling Walls Lab. Held in collaboration with the German Academic Exchange Service (DAAD), Falling Walls Lab took place at Forman Christian College University (FCCU) Lahore on September 27, 2016.

The Falling Walls Lab is a non-profit series of scientific conferences aimed at building and fostering connections between outstanding researchers, academics, entrepreneurs, and professionals. These conferences take place across the globe throughout the year and undergraduates and postgraduates, young professionals, entrepreneurs and junior professors whose latest university degrees do not date back more than 5 years are allowed to apply for the competition.

In total, 100 applicants qualify for the Finale in Berlin. Each finalist receives the opportunity to present their research work, initiative or business model within three minutes in front of a high- caliber jury from academia, research and business. The three winners receive a cash prize and give their talks again on the grand stage of the Falling Walls Conference before an audience of 800, which includes entrepreneurs and venture capitalists on the next day. The chief guest for this year’s Finale would be the Chancellor of Germany Angela Merkel.

The date for the event coincides with the anniversary of the fall of Berlin Wall on November 9, 1989.

Eminent members of the business community and society were invited to attend the conference at FC College with business tycoon-cum-politician Jahangir Tareen as the chief guest. A five-member jury, headed by veteran journalist Najam Sethi as the chairman, judged the presentations. Other members of the jury were renowned entrepreneurs and innovators, like Ramzan Sheikh; Pir Saad Ahsanuddin; Ali Raza Siddique and Director DAAD Lars Bergmeyer.

Each applicant was allowed three minutes to present three power point slides, followed by a two-minute question and answer session. The jurors evaluated the presentation with a score based on three criteria: Breakthrough factor – does the idea have originality and represents a discovery, Relevance/Impact – does it have a long-term or short-term effect, and Structure/Performance – is the presentation well-structured and feasibility of the project.

A total of five applicants’ names were announced at the end of the competition, with the top three as winners. Awais Shafique from NUST Islamabad emerged as the first place winner with his idea of breaking the wall of dependence of tremors through a padded machine that stabilizes the hand by generating a movement opposite to the tremor.

Abdullah Ahmed from NUST Islamabad had the idea of a padded machine worn by bowlers on the arm which ascertains the spin, speed and angle at which a cricket delivery is bowled. This idea removes the need for a camera to calculate these variables since it has sensors which detect the information in real time and allows for a 2D and 3D analysis of the bowler

The runners-up were Osama Khalid from FCCU with the idea of microneedle patches which can be used for vaccinations (especially influenza) instead of hypodermic intramuscular injections which are currently used for vaccinations. The advantage microneedle patches are that the patches are biodegradable, painless and can be stored at room temperatures while conventional vaccines need to be stored in freezing temperature and thus become inaccessible to rural areas. Followed by Abdullah Ahmed from NUST Islamabad who came up with the idea of a padded machine worn by bowlers on the arm which ascertains the spin, speed, and angle at which a cricket delivery is bowled. This idea removes the need for a camera to calculate these variables since it has sensors which detect the information in real time and allows for a 2D and 3D analysis of the bowler. The other two contestants were not winners but the jurors showed a keen interest in their ideas.

The event was organized by the Leadership Forum and the School of Management’s faculty under the leadership of the Executive Dean Dr. Major General (R) Noel Khokar at FCCU, who, in his opening address, appreciated the need for such global events for exposure for the students of today. Forman Photography Society partnered with the Leadership Forum as official photographers and videographers for the event. Mariam Khalid moderated the event as the master of ceremonies and Maryyam Khan was the event manager on the day.

While addressing the conference, Jahangir Tareen emphasized the fact that innovation will mostly come from the youth of Pakistan. He drew parallels between the European economies and the economy of United States (US) to highlight the reason why most innovations come from the US and not Europe. He was of the opinion that it’s because the US has fostered a business environment where venture capitalists and risk-takers are encouraged and thrive.

“Pakistan must adapt, the government and the State Bank must take measures to promote venture capitalism so that young boys and girls can actually implement their innovative ideas,” said Tareen. “What will shape the economy is how well we support our youth.”

“As an entrepreneur, I would be interested in six of the ideas presented here today,” said Ramzan Sheikh, the chairman of Mainland Group of Industries.

The event also saw Naeem Zamindar, CEO and Country Director of Acumen Pakistan, speak to the young entrepreneurs and students about the need for drive and determination in innovation.

According to one of the team members of Leadership Forum, Aizaz Amjad, “The event was meant to promote networking amongst the guests and the applicants, to show the world that people from Pakistan are not risk averse, and to give an opportunity to the contestants to present their ideas on a global platform.” The president of Leadership Forum Junaid Iqbal and co-president  Zantasha Baig were commended for successfully executing the remarkable event.

The event formally culminated in closing remarks by the Jury Chairman, Najam Sethi and Dr. James Tebbe, Rector FC College followed by a networking tea for the keen participants and the esteemed guests present to allow for more linkages to be developed between the think tanks and the youth of Pakistan.