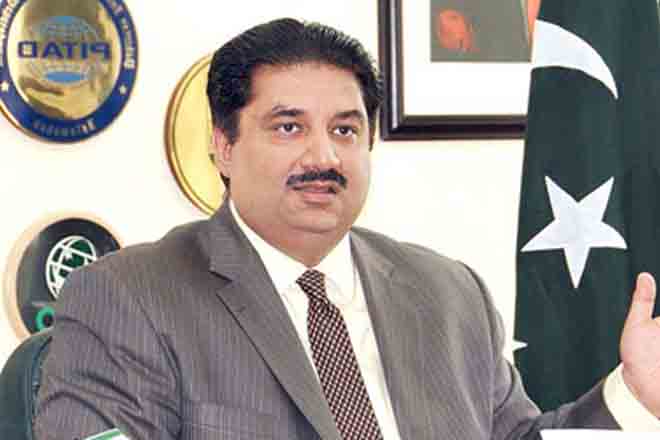 Commerce Minister Engineer Khurram Dastgir Khan on Friday said the GSP+ status had boosted Pakistan’s exports to the Europe by 37per cent during the last three years.

According to press statement received here, “The GSP+ status offers huge potential for enhancing mutual trade between Pakistan and the European Union,” he stated this in a meeting with Member of the Committee on International Trade (INTA) in the European Parliament, Jan Zahradil.

The minister apprised Zahradil about various steps being taken by Pakistan to improve conditions of productions and achievements in terms of improving law and order and human rights in the country.

He was of the view that focus of Pakistan had shifted towards strengthening its economy through trade rather than aid.

Meanwhile, in an interview with Politico, Dastgir said, “A tariff-cutting accord for Pakistani exports to Europe is an essential tool in the country’s fight against terrorism and illegal migration.”

Commerce Minister Khurram Dastgir Khan was interviewed by Politico, which was on published on January 26. Politico is an influential global news and information organisation with its publications based in Washington, DC, New York and Brussels.

Pakistan obtained GSP+ three years ago, granting it tariff-free access to the EU market for almost two-third of its exports.

Khan pointed to “encouraging developments” in an interview ahead of a meeting with European Commissioner for Trade Cecilia Malmström in Brussels this week. Yet the conflict-plagued country must still tackle widespread corruption and rights violations if it is to maintain the trade status quo and push for a broader deal on market access for its goods in the next decade.

“We are just coming out of a very difficult 10-year period full of violence, energy shortages and uncertainty for business,” Khan said. “2015 was the first year with a positive turnaround and we are focusing on more growth and social improvements.”

Pakistan mostly sells textiles, leather and footwear to the EU. Since 2013, the last year before the GSP+ (Generalised Scheme of Preferences) deal, exports to Europe have increased from €4.5 billion to €6.1 billion in 2015, according to EU Statistics m EU exports to Pakistan —such as machinery or chemicals — also grew slightly.

This creates jobs in Pakistan which “are a vehicle to fight poverty and extremism,” Khan said. “We are now seeing in many cities that more and more women are being employed in the textile sector, which has truly beneficial socio-economic effects.”

“All this is crucial to fight the root causes of terrorism,” which has long plagued Pakistan, with Taliban insurgents destabilising the country’s northern Waziristan region, the minister continued. Improving people’s economic prospects also reduces the motivation to try and reach the EU illegally, he argued.

Commissioner Malmström this week argued cutting EU tariffs “can help developing countries diversify their economies and move higher up the value chain.” That, she said, represents “leverage we can use to shape globalisation.”

“The promise of getting better trade access to Europe — or the threat of losing it — is a powerful incentive to reform,” Malmström said, mentioning Europe’s determination to fight for better labour and environmental standards and tackle corruption.

Khan admitted his country still has work to do. “There are concerns, and we are acting on those concerns,” he said, adding his government is well aware that it can lose the preferential access to the EU market if it doesn’t deliver on reform targets Islamabad is also keen to use the multilateral forum of the World Trade Organization “to raise, together with the EU, a joint voice against protectionism” and to support the EU’s plan to establish multilateral court of investment disputes, Khan said.

In 1959, Pakistan was the first country to accept a controversial arbitration mechanism in a treaty with Germany allowing companies to sue the government over public policy decisions that put them at a disadvantage.

However, Khan said his country’s recent experience of such clauses, which are abhorred by the opponents of modern trade deals, “hasn’t been very positive.”

“Many multinational companies have an annual turnover that is bigger than Pakistan’s, so it is difficult to fight their claims,” he said.

The EU’s multilateral court — championed by Malmström — with dedicated judges, transparent procedures and an appeal mechanism, would better shield the country from unwarranted claims, he said. At the same time, he emphasised his country must do more to attract European investors, which is why the government will work this year on making the taxation system “more predictable.”

Provided it meets the EU’s reform targets, Pakistan’s GSP+ status remains in place until 2023. By then, Khan expressed hoped his country’s development will have allowed it to strike a full-fledged trade agreement with the EU.

“A more ambitious trade agreement is very much on our radar,” he said.