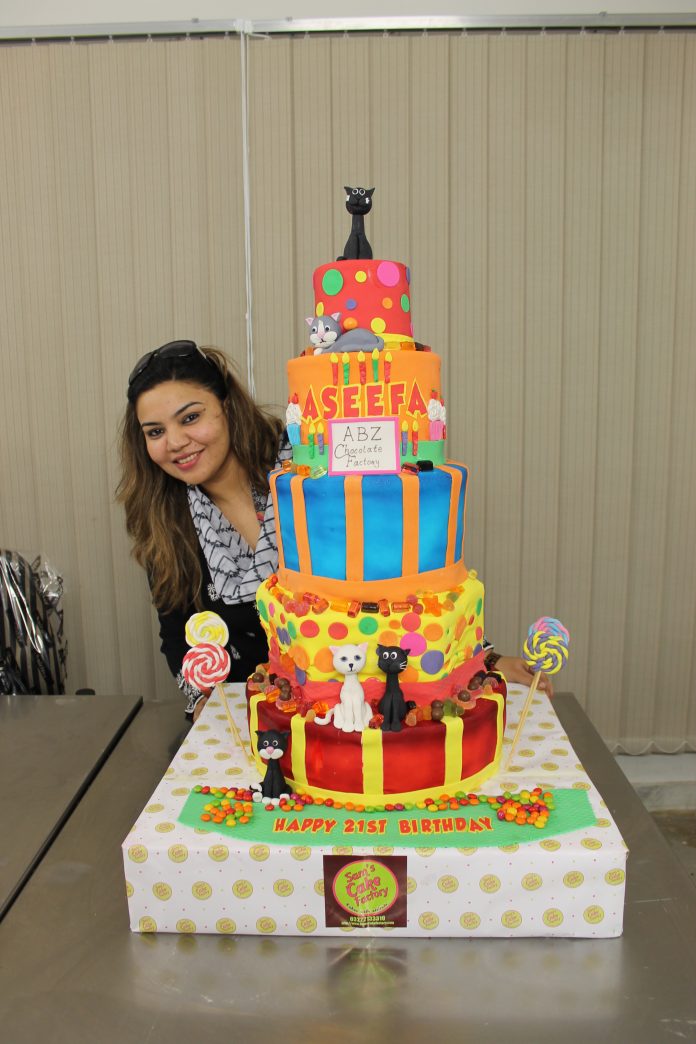 Five years ago, a young housewife Sumera, aka Sam, ordered a customized cake for her daughter’s birthday party. She, along with her husband Waseem, went all the way to the baker’s house, 40 minutes away from the party venue, to pick up the Barbie Doll cake. The fondant cake that cost 400 riyal at the time was nothing less than a sugary heaven; yet Sam knew she could do a better job herself. This sparked her interest in baking and she thus began her entrepreneurial journey. Today, she sells one of the most sought-after designer cakes in Karachi, and the demand for her cakes is only growing despite a high price tag attached to them.

With a limited to negligible social life in Jeddah, Sam had the time to learn baking and cake designing. In 2010, she made 40 cupcakes for a Valentine’s Day party at her husband’s office – and that’s when her work was noticed leading to her first-ever order from one of her husband’s colleagues and an online business she started in Jeddah to sell her designer cakes.

Within a year, the expatriate couple moved to Pakistan and decided to launch their designer cake business in Karachi with a minimal initial investment, which they refused to disclose.

To encourage his wife, Waseem made a Facebook page where his wife sold customized cakes as per customers’ needs, which paved way for her to reinvest her profits and open her first physical outlet – a distinctive tread in the retail setting where businesses usually go from conventional to online.

The influx of new internet users has expanded the size of Pakistan’s online market and helped women like Sam launch Facebook-based businesses to reach out to a market of 30 million users. In other words, they have been able to target an audience difficult to reach physically – and that too, from the comfort of their homes.

According to industry estimates, Pakistan’s e-commerce transactions are worth $300 million – Facebook-based transactions account for more than a third of this growing market segment.

The significance of this online segment can be gauged from the success of Sam’s business, which is now expanding physically by reinvesting profits earned from the online platform.

Five years into the business, Sam’s Chocolate Factory has an online shop, a bakery at Malir Cantt with a kitchen above it, and another outlet that they launched in September of 2016 at Zamzama – one of the most sought-after business locations in the upscale neighborhood of Clifton, which accounts for more than 80 percent of her clientele.

For people with a sweet tooth, Sam’s Chocolate Factory is nothing less than a delight. This bakery and confectionary business specializes in designer and customized cakes and sells a pound for Rs 2,000 – almost double the average market price – with a minimum order size restricted to three pounds. The bakery takes additional delivery charges of Rs 500. This high price label and delivery charges, however, aren’t causing any slowdown in the demand for her cakes.

“Our designer cakes are expensive because we do not include the weight of the fondant. We weigh only the sponge when giving a pound,” said Sam.

Unlike other novice start-ups in Pakistan, Sam’s Chocolate Factory defied all odds and went from an online business to a conventional business rather than operating the other way around. Even after five years of its inception, Sam’s online shop is working better than her conventional outlet. The owners refused to disclose the tax numbers but contrary to many other retail stores of the same size, they have been filing taxes for the last three years.

lemon tarts. The finely decorated bakery at Malir Cantt, 7 kilometers east of Karachi’s airport, with its display festooned with creamy chocolate fudges and flavored biscuit tarts has grown its client base by embracing international standards of cake decoration.

“We import the chocolate we use from Malaysia,” said Waseem. He further explained that all of the equipments used in baking are professional and many are imported from countries like UK, USA and Canada.

The business is jointly managed by Waseem and Sam who opted for separate departments each. Sam looks after the baking and designing whereas, Waseem holds the responsibility of the administration and marketing. Hailing from a customary domestic culture, Waseem rose above the conventional mindset and encouraged Sam to initiate her own venture.

“He has been very supportive of me throughout. We proudly call it a family project,” Sam said of her husband. “We started on a tiny mahogany table and made this big together. He used to deliver cakes himself in the beginning when we did not have drivers for delivery.”

Rapidly growing businesses with female proprietors aren’t a common occurrence in Pakistan –it therefore doesn’t come as a surprise that IBA singled out this venture in 2013 to be studied under the Women Entrepreneurship program initiated by AMAN Center for Entrepreneurship Development (AMAN-CED), IBA in collaboration with The World Bank.

Sam has been attending the sessions at AMAN-CED, IBA for the last few years and has collected praises from the attendees each time.

Currently, Sam’s kitchen employs four professional bakers, three kitchen workers, nine cake designers, two secretaries, two drivers and a few other management employees. The number of employees counts up to almost 30, each working in their specialized division. Sam believes women prove to be better cake designers. Therefore, all the nine designers are young girls with interest in arts and craft.

“We do not look for education while hiring but we focus on their artistic abilities,” said Sam. “I personally train each of the girls and help her master the art of cake design.”

Whether the credit is given to skilled designers, professional bakers or both, Sam claims her bakery receives negligible complaints.

“We have baked more than 9,000 customized cakes in the last four years and have received less than 10 complaints,” said Sam. She explained that the number of complaints are very small and can be neglected in such a huge business.

Waseem said that they plan on going one step at a time with opening their second outlet at Zamzama being the first step and shifting the kitchen there in a few months, the second.

“We have had our ups and downs but we look forward to going a long way.” the entrepreneur couple said about their future endeavors for Sam’s Chocolate Factory.

As the smuggling of Indian and Pakistani products continues to thrive through third country channels, why not accept the reality and formalise trading ties?
Read more
FEATURED

Profit explains what private equity is, and talks to some of the major stakeholders about the future
Read more
Banking