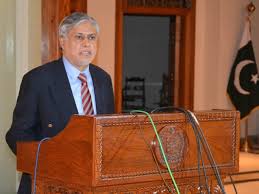 Federal Minister for Finance and Economic Affairs Senator Mohammad Ishaq Dar has said that Pakistan was benefiting from the economic reforms carried out by the government so far, which had helped the country achieve macroeconomic stability.

He expressed these views while meeting with Country Director of World Bank for Pakistan, Patchamuthu Illangovan (Illango), and members of his team here on Sunday, a press release said. The minister discussed with Mr. Illangovan, the progress of various economic reforms undertaken by the government.

He said that after completion of the home-grown reform agenda with assistance of the IMF, the government was committed to continue with the reform agenda that it had promised in PML-N’s election manifesto of 2013.

He said that the government would ensure to continue the process of reforms with the same zeal so as to achieve the objective of higher, inclusive and sustained economic growth. The finance minister said that the new Companies law was a part of the reform effort. The law has already been passed by the National Assembly and hoped that it would soon be passed by the Senate as well. Once enacted, the law would go a long way in improving corporate governance and surveillance in the country, keeping in line with the best international practices, he added.

The country director stated that the government’s commitment to reform was widely acknowledged.

The World Bank will continue to support and assist the reforms in various sectors of the economy. Illangovan, on the occasion, updated the minister about the status of different World Bank sponsored/supported projects and said that he was fully focused on furthering Pak-WB economic cooperation.