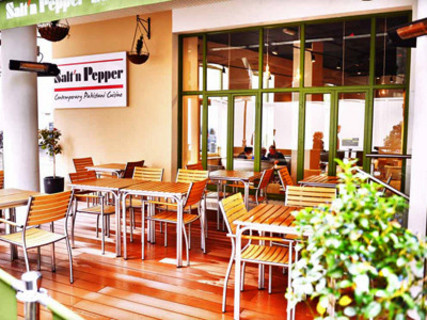 Elizabeth Olsen said, “I get way too much happiness from good food.” And honestly, who doesn’t? Food is an expression of happiness in times of celebration just as much as being a source of  comfort in times of distress for most people.

The Pakistanis and their love affair with food has remained consistent throughout history. Taking this a little further, zinda dillaney Lahore are known for their ultimate love for food in every season and every shade. Some of these zinda dil people have taken their love for food to another level. They not only fancy delectable foods for themselves but also make it available to others, sometimes as a business. One such food connoisseur is Mahmood Akbar , the owner and CEO of the renowned restaurant chain, Salt’n Pepper (SnP).

Mahmood Akbar was no novice in the food business when he decided to launch his own business in Pakistan in the early eighties. He obtained an Associate degree in Hotel management from Miami in the early days of his professional life while concurrently working for Sheraton Hotels.

Later, he moved to Connecticut where he secured a BSc. degree also in Hotel Management from University of New Haven. Upon graduation and with sufficient experience under his belt, he then felt confident to join Hilton International Hotels as a Food and Beverage Manager and was sent to Lahore for the opening of Lahore Hilton (now Avari Hotel).

Later he also worked with Hilton Hotels in Hong Kong and then went on to work at hotels in the far east. Hilton provided him with five years of extensive exposure into the hospitality business. In 1983, Mahmood felt it was time to launch his own brand of restaurants. Mahmood’s first personal business venture was Salt n’ Pepper which was a huge success considering how it has not only maintained its appeal to the Lahorites but has been able to grow into a number of branches.

Talking about the multitude of challenges being faced by the restaurant industry in Pakistan, Mahmood explained that the success rates of businesses in the local market has been and continues to be very low. This can partially be explained by a multitude of new food outlets opening every year since the food business does not require massive start up capital. He quoted American figures of success rate of restaurants as merely 10% . “In the last 10 years, 25 restaurants opened and closed on M M Alam Road alone.”

He mentioned the lack of qualified personnel as another major hurdle in the Pakistani market. “The restaurant business doesn’t require heavy start-up capital, rather it is more labor intensive and there are not many skilled people here.” This problem is aggravated when businesses are forced to poach competitor’s workforce. It is worse for businesses that invest in  employee training. “For them it is a bigger loss when their trained workforce leaves and they have to rehire and train more people.”

According to Mahmood, this problem is easily solvable by establishing professional training institutes. He said, “We blame the government but the truth is that we just don’t have enough private institutions to train chefs, managers and other related workforce. There are a select few but they also don’t reach the desirable standards.” Drawing comparisons to our neighboring nations, he said that India has a  lot more institutions and that has allowed them to keep up with their hospitality needs.”

He said that this makes it much more difficult and costly for restaurants to get quality food. The available supplies are in smaller packaging and that makes it less cost effective for businesses that need to buy in bulk amounts. “Americans learnt the lesson of economies of scale very early. Where bulk products are produced, the cost automatically falls.”

In his opinion, processing companies would not only be profitable on their own but would also be of massive help in the expansion of restaurants business.

Despite all these challenges, SnP has been able to shine and progress. Speaking of his business Akbar recounted, “We had a 90 seat restaurant in Liberty Market basement in Lahore. Now it has expanded to 350 seats. On Mall Road we had a 50 seat restaurant which now has 175 seats.” According to him the reason for this continued success is better management, food control and purchasing decisions. “We purchase our supplies daily and ensure that they are of high quality and are fresh.”

His take on competition is somewhat surprising considering the plethora of restaurants in existence these days. He said that when he opened his first SnP restaurant, there weren’t many competitors. To him competition is good for restaurant business. “More restaurants attract more people to the industry but it is only the quality that retains them.” According to him, restaurants in Pakistan normally open to target a specific niche and to cater to different customers. “Most of the places here are dedicated to particular cuisines or desserts or some form of special food.” This makes the actual direct competition very little for a restaurant like SnP since a single restaurant or restaurant chain doesn’t sell all type and variety of food.

He compared the Pakistani industry with those in other countries by saying, “In foreign countries people go out to eat on average of 21 times per week. Their lifestyle demands so. In Pakistan the average for people to go out to eat is once per week.” With this routine, the restaurants compete with each other on a daily basis. When people decide on their dining out trips, they already have some special kind of food in their minds, so they go to places serving that particular kind of food.

Marketing and advertisements are considered to be the backbone of any business in the modern day, but SnP has been able to survive and thrive with little or no advertisement at all. Mahmood said that back in the early days it used to be word of mouth and even now it is somewhat the same.

“There used to be few English and Urdu newspapers and an advertisement in each of them was enough to tell everyone about the new restaurant. After that it was through the word of mouth.”

He said that in Pakistan, food is mostly prepared at home, so it is a rarity for most people to go out to eat. “We have now started to explore social media for marketing but our prime focus remains the word of mouth of our customers.”

Regarding placement decisions he said, “In Pakistan the case is opposite to most other places. Here we have the land or a building first and then we make a decision about what to do with it.” So the restaurants were not opened according to their location feasibility, but they were rather random decisions. Just like the locations, Mahmood Akbar is also least worried about the recipes of his dishes. He has even published a book of recipes of the dishes served in his restaurants and is not afraid of the recipes being stolen. “I am simplifying food instead of making it difficult. It’s my way of giving back to the community.”.

He is against processed foods and believes that through his recipes he is providing people with “quick, easy and economical” ways to prepare and eat healthy foods. He considers it absurd to think that someone will follow all his recipes and have another restaurant with all the same dishes. If one or two of them are replicated, however, he considers it a good thing as opposed to a loss.

Mahmood Akbar says he loves food and understands its complexities. He has ensured to keep food of high quality and taste yet at competitive prices. “We have been able to control our costs by effective management of the entire process. Our wastage is low and our productivity is high. So even at lower prices we are good.”

He himself is a fan of Dall Gosht and Chawal. Despite being a connoisseur of food, he never puts down less than delicious food. “I have eaten rubbish quietly and still praised it. The fact is that if someone offers me food, to them it is the most delicious and filled with pure sincerity, so it deserves nothing but praise.”

He recalled the time when Lahori’s were quantity eaters and not so pushed about food quality. “Things have changed  now, especially with the younger generation. To them quality comes first and that is a welcome change.” He said, “Make quality your hallmark and you will succeed in this business.”

Growth and expansion are in his plans for the future but he has pledged to continue remaining sincere to food and maintaining its quality. He has already penetrated the London eatery market and hopes to see Salt’n Pepper expanding.

Despite the pandemic, Mushtaq Panjwani has managed to sell a number of franchises
Read more
FEATURED

The advertising industry scrambles in wake of Amazon announcement

Within hours of the rumors, feasibility studies with regional support concluded that agencies need to start securing reseller relationships for the Amazon advertising unit and either build or resell the B2B technology that the market will eventually need
Read more
CEMENT

Dewan Cement is struggling. But why?

In what was supposed to be a record breaking year for the cement industry, Dewan continued to tank
Read more
- Advertisement -