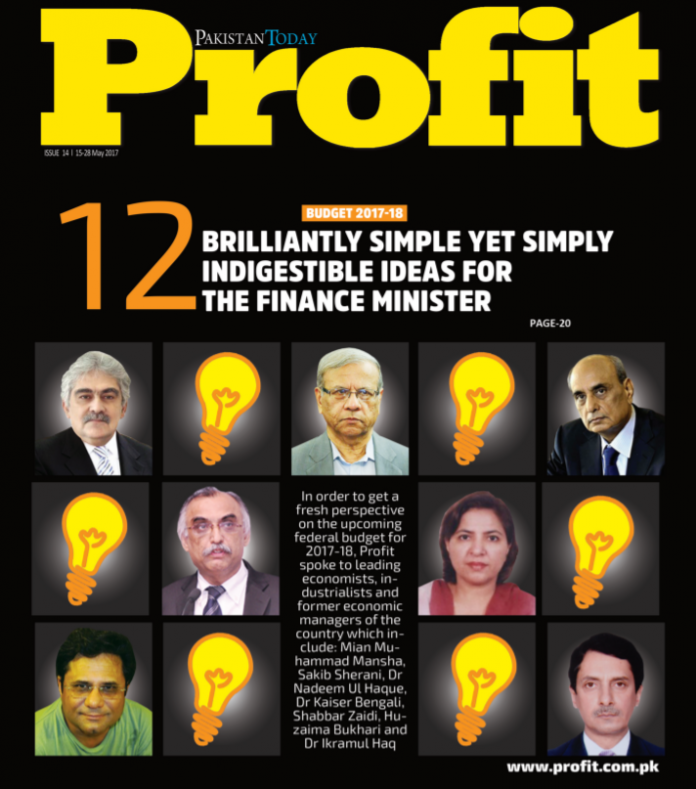 In the run up to the federal budget, there are many points of view in the market of ideas for the government to act upon. We have outlined some of them in this issue of Profit. These range from those who preach the gospel of the free market like former planning commission boss Nadeem-ul-Haq to leftist highbrows like Qaiser Bengali, who was instrumental in putting together the BISP. This right-to-left spectrum obviously has many distinct shades of opinion on the issue of taxation.

It is on this front of taxation that we here at Profit would also like to take a crack at throwing out an idea to the government. Except, unencumbered by the expectation of actually being taken seriously by the finance ministry (a luxury that the two aforementioned gentlemen do not have) we can afford to be rather bold in our loud thinking.

Try this for bold: we propose that the government scrap the personal income tax altogether. Yes, you read that right. Completely scrapped. Compared to us, Nadeem-ul-Haq looks like Qaiser Bengali.

But why, you ask? Well, there are several arguments for it. For starters, in one fell swoop, the black economy (other than that derived from non-tax crime) would become legal. With no reason to hide their money, the individuals in question will their cash out of non-productive stores of value like gold and deposit it in the banks. This would undoubtedly be a fillip to investment in the country.

But where would that money that we would be letting go of come from? Well, first of all, as a proportion of federal receipts, it is not as large as one would think. But, to answer the question: indirect taxes. But that isn’t fair, you say. Progressive income taxation is the way to go; taxes on consumption are regressive and hurt the poor. Well, yes, but two answers to that. First of all, the merits of progressive taxation are best discussed in countries that have effective systems of taxation, which we don’t; the trading classes get away with everything whereas the low-hanging fruit that is the salaried class bears the brunt. Secondly, even the poor are hurt by direct taxation in terms of the withholding taxes that they have to pay on consumer products like, say, cellular calling cards. Yes, but they can be redeemed and reimbursed, you say? No one redeems. No one from the middle class and certainly no one from the poor working classes will take the additional cost of having a tax accountant having a look at all their receipts

We need to be selective about increasing the indirect taxation. Perhaps slap higher rates on luxury items; Pigovian taxation, if you will. Whatever the resulting mix is going to be, there is going to be a corresponding inflation. But one accompanied by increased spending and economic stimulus as well.

This removal of income tax should be accompanied by an encouragement by the government for the people to utilise proper banking channels and financial technology. With an increased documentation and, indeed, understanding, of the economy, we could perhaps move back to the imposition of income tax in due time.

Anything is better than this current system, where, in the name of lofty ideals of progressive income taxation, it is the salaried class and the poor (through withholding taxes of consumer items) that pay and the fat cats remain mostly out of the net.