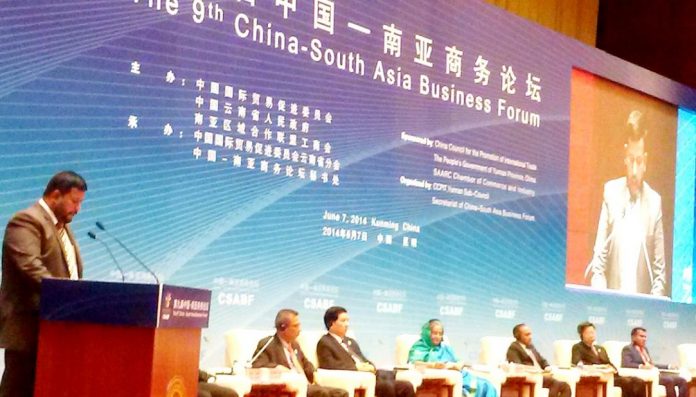 The delegation comprised of leading businessmen from all SAARC member states and the office bearers of SAARC CCI, said a statement issued here on Monday.

The 12th CSABF was organized by China Center for Promotion of International Trade (CCPIT) Yunnan Province of PRC in collaboration with SAARC Chamber of Commerce and Industry.

This year the forum was organized under theme, “Challenging Opportunities: Employment Creation and Innovative Investment”.

Since the creation of this platform in 2006, the bilateral trade between China and the South Asian countries paced with tremendous growth rate of 15pc per annum and increased from mere 25 billion US $ in 2006, to 113 Billion US $  in 2016.

The MoU with Beingmate, is a first joint effort towards Corporate Social Responsibility to benefit the families in South Asian countries.

Beingmate Creation, the very first EU-standard, infant milk formula offering of Beingmate, is manufactured in Ireland for both babies in China and EU. According to this MoU, the Beingmate will donate maximum 120,000 cans of infant milk to SAARC CCI for distribution on a need basis in South Asian Countries. This step will ensure alleviation of infants.