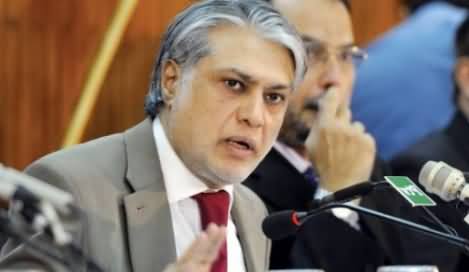 Finance Minister Ishaq Dar has said that Pakistan is committed to the objective of regional connectivity as it believes that the future of people of the region lies in greater connectivity with each other’s markets.

The minister was addressing the inaugural session of CAREC Institute here Thursday.

The finance minister said that Pakistan seeks to expand trade and investment links with the region in the East, West and Central Asia. It aims to expand oil and gas pipelines, infrastructure, electricity grids and transport networks with these regions so as to create employment opportunities and accelerate growth.

Dar called upon the member countries to expedite work on the proposals made by the prime minister of Pakistan to accelerate cooperation among the member states in the areas of aviation, capital markets and capacity development.

Reiterating Pakistan’s strong commitment to the CAREC Program, Ishaq Dar said that enhanced regional cooperation will play a vital role in Pakistan’s economic success in the future. Referring to the CPEC initiative, he said that it is a milestone in regional connectivity which will not only benefit Pakistan and China but the whole region and beyond. He complimented the Chinese leadership for the One Belt One Road initiative as well as its role in the establishment of Asian Infrastructure Investment Bank (AIIB), as a new multilateral institution to address the infrastructure financing needs of countries in the Asian continent.

The finance minister described the inauguration of the CAREC Institute as a major step in enhancing regional cooperation and achieving the common goals envisioned under the CAREC Program. He thanked the government of the People’s Republic of China, the Government of the Xinjiang Uyghur Region, and the people of China for their warm reception and generous hospitality in the vibrant city of Urumqi, and also for hosting the CAREC Institute.

He also appreciated the efforts of Asian Development Bank, under the leadership of President Nakao, and CAREC members for the institutional support to CAREC, and for making this important event possible.