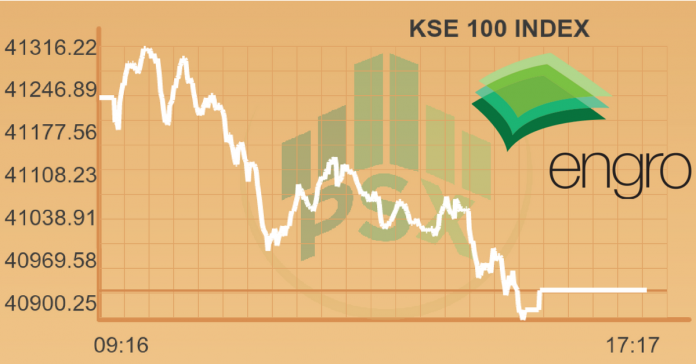 LAHORE: Trading at the bourse on Tuesday was underpinned by MSCI’s overnight announcement where the leading index provider ejected Engro Corporation (ENGRO) from MSCI Emerging Markets Index, while no addition has been made to the aforementioned index. To add to the struggle, Pakistan Stock Exchange has declined 491.92 points in the first two days of the week and investors fear that it might continue this trend.

Resultantly ENGRO crashed 5 per cent with only 0.66 million shares exchanging hands. On the flipside, some respite was perceived on the external front given an allowance of $ 3 billion borrowing from international debt markets. The PSX dropped 18.10 per cent since its inclusion.

At close KSE-100 was down 0.7 per cent; activity improved as volumes rose 60 per cent while value was up 57 per cent.

It was again a close in the red for many sectors. The commercial bank sector lost 0.61 per cent from its cumulative market capitalisation. Oil and gas sector depreciated by 1.70 per cent and the cement sector took a 0.24 per cent hit on its market cap.

Channel checks suggest that domestic DAP prices are increasing in line with rising international prices, DAP prices up by $ 21 per tonne, WoW, ending Nov 10. Local producer FFBL will raise prices by Rs 50 per bag whereas the importers have raised Rs 50-200 per bag.