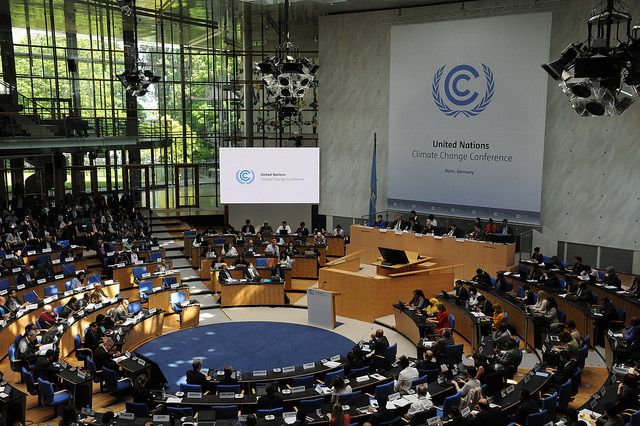 BONN: The leaders of Germany and France promised to limit the use of coal on Wednesday and urged more global action to combat global warming after U.S. President Donald Trump pulled out of the 2015 Paris agreement.

German Chancellor Angela Merkel and France’s President Emmanuel Macron said the pact was only a start to reining in a rise in global temperatures, blamed for stoking more heat waves, floods and rising sea levels, and needed to be toughened.

“Climate change is by far the most significant struggle of our times,” Merkel told delegates from nearly 200 nations attending a Nov. 6-17 meeting in Bonn on ways of bolstering the Paris accord that aims to end the fossil fuel era this century.

Merkel’s conservatives are seeking to form a new coalition government that includes the ecologist Greens, who are demanding steep cuts in carbon dioxide emissions by 2020.

“We know that Germany still uses coal to a large extent and coal, especially brown coal, should make a contribution to meet our (emissions reduction) goals,” Merkel said.

Macron said France aimed to close down all coal-fired power plants by 2021 as part of action to limit greenhouse gas emissions.

Macron, who will host a summit in Paris on Dec. 12 about climate finance, said France would make up for a shortfall in U.S. funding for the climate science research by the U.N.’s Intergovernmental Panel on Climate Change (IPCC).

“They will not miss a single euro,” he said to applause. U.S. contributions to the IPCC budget have been about 2 million euros ($2.36 million) a year in recent years.

Trump, who doubts climate change is primarily caused by man-made emissions, said in June that he would pull out of the Paris Agreement and instead promote the coal and fossil fuel industries.

“I welcome this as it highlights the importance of climate protection in large parts of the U.S. regardless of the decision by President Trump to leave the Paris accord,” she said.

Some environmental groups expressed disappointment that Merkel did not set a date for phasing out coal, saying greenhouse gas emissions were harming vulnerable people around the world.

“She needed to come to Bonn and show she had heard the suffering of the people of the Pacific and around the world … She did not deliver this,” said Jennifer Morgan, executive director of Greenpeace.

In the coalition talks, the Greens are holding out for carbon dioxide emissions cuts totaling 120 million tonnes that would require the closure of 20 coal plants.

Merkel’s conservatives and the pro-business Free Democrats (FDP) – the third partner in the coalition talks – want cuts of up to 66 million tonnes.

“Growing carbon markets in Europe and North America, and China’s expected announcement of one of the world’s largest emissions trading systems, are a good sign,” he said.

“But to meet the Paris goals we need at least 50 per cent global coverage and a higher price on carbon to drive large-scale climate action,” Guterres said.