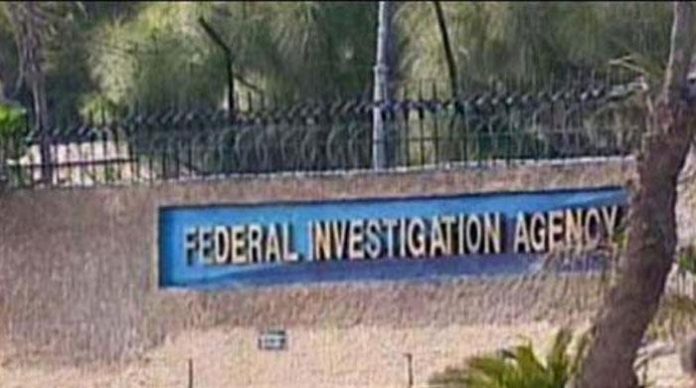 KARACHI: The Federal Investigation Agency (FIA) has arrested two foreigners, Zhong Zhongmin and Li Chonhong, in a tax-evading case of Rs 675 million by their company.

An FIR was registered against a foreign company, customs officials, and others on the allegation of preparing/submitting fake/bogus corporate guarantee for clearance of their surveying equipment valuing Rs 677 million.

The company is also facing adjudicating proceedings before customs authorities but got a stay order from Sindh High Court against proceedings. The court had directed the company to deposit 1 per cent of all temporary imports as a surcharge on expired corporate guarantees.

An official said that this recovery was a great achievement and an honour for the FIA team. Senior officers referred to this as a trendsetter and a mighty big case in the history of FIA where a huge amount of Rs675 million was recovered in a short period of 50 days only.

The subject FIR is the outcome of enquiry initiated regarding fraudulent re-export of surveying equipment on the strength of bogus/forged documents, without paying duties/taxes. The consignment was scheduled for shipment through the customs clearing agent International Moving and Trading Company (IMT Co), which was intercepted by FIA.

The case was pursued by Anti-Corruption Circle Additional Director Ashfaq Alam, Assistant Director Rashid Khanzada, and Inspector Zahoor Bajkani along with the team. It may be mentioned here that Rashid Khanzada was moved from Pakistan Customs to FIA on deputation.

The company to which the arrested individuals belong to is working in Pakistan since 1995 and is engaged in business with numerous oil and gas producing companies. It has imported hundreds of consignments of surveying equipment under the provision of SRO-678 (I) 2004 but the company didn’t comply with terms and regulations of SRO.

The temporary imports are immune to levied duties and taxes subject to providing a corporate guarantee for each consignment whereby importing company indemnifies that imported goods will be re-exported within two years (now five years) or on the completion of the project, whichever is earlier. However, the company has not re-exported any temporarily imported consignment of surveying equipment so far, thus, causing a serious violation of SRO-678 (I) 2004.

The record procured from various customs documents reveals that 125 corporate guarantees of the company have already expired but the company did not re-export the temporary imports, hence, the company is liable to pay all duties and taxes plus surcharge.

This way, the total recovery made from the company in the instant case stands at Rs800 million which is a result of FIA’s timely action and tactful subsequent processing of the case.