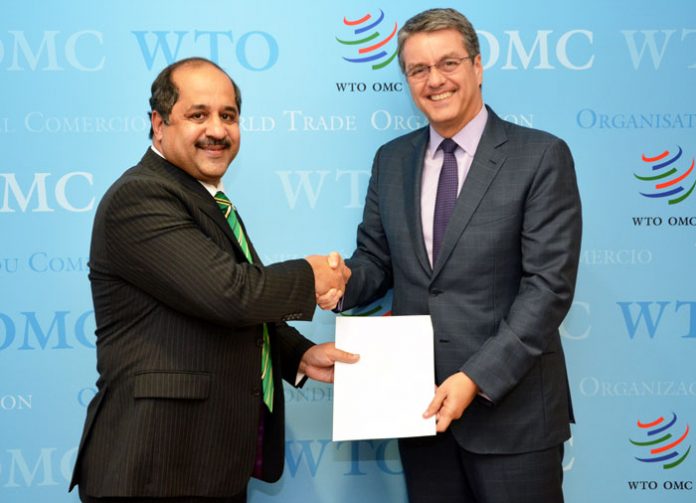 LAHORE: “We do not want to dirty our hands with wheat, rice, and sugar. I wonder why your people want to do it,” said Pakistan’s Ambassador to World Trade Organisation (WTO) Syed Tauqir Shah at a WTO meeting.

Shah expressed these views in response to India’s Commerce and Industry Minister Suresh Prabhu’s comments to trade ministers from 164 countries in which he said that India did not foresee an outcome at the WTO meet which has left the country with no permanent solution to the food security concerns. Prabhu expressed that the Indian government believes the current rules make it difficult for poor economies, including economies like China to source grains, oilseeds, and pulses through a regime similar to minimum support price in India.

However, Pakistan does not share the same views as India despite seeking a permanent solution under the G-33 coalition. “We have done away with ration shops and moved to cash transfers through an ID-based programme. We do not want to do it,” Shah said.

Replying to India’s concerns over Pakistan’s stance on procurement through an MSP-like programme, Shah added, “There is a problem in building massive stocks like India. There are concerns about the impact in third countries.”

Maintaining its position as a strong member of the G-33 Pakistan believes in a different approach to finding a solution, Shah added. Whereas China and India believe that developed countries should reduce subsidies to their farmers in order for developing countries to establish as well.

Shah also added “Why should we only allow eBay to sell in our country when many of our small businesses cannot register on eBay or PayPal?” asking Alibaba co-founder Jack Ma as a response to Pakistan’s stance on establishing a global economic framework.

When asked about investment into the country, Shah said that such measures will not result in a competitive environment where countries battle it out to attract investors.