LAHORE: State Bank of Pakistan (SBP) on Monday through a notification to the bourse invited the shareholders and members of the defunct KASB Bank, which was merged into BankIslami Pakistan Limited (BIPL), to file written objections with the valuation of KASB Bank as set out in the scheme of amalgamation, in pursuance of the judgement dated March 17, 2018 by the Sindh High Court (SHC).

The notification read, “Defunct KASB Bank Limited was merged with and into BankIslami Pakistan Limited under Section 47 of the Banking Companies Ordinance (BCO), 1962. In compliance with the judgement dated March 17, 2018, of Sindh High Court, in CP. NO. D-3007, 3076 and 4927 OF 2015, the shareholders/members of the defunct KASB, as on March 27, 2015, are invited to file their written objections to the valuation of the defunct KASB Bank as set out in the scheme of amalgamation. The valuation report of the auditor is posted on State Bank of Pakistan (SBP)’s website.”

It further went on to add, “All the objections, in writing, should reach SBP within 15 days i.e. by or before May 29, 2018. After receipt of the written objections, SBP will proceed in accordance with the judgment of the Sindh High Court.”

Earlier, SHC had directed SBP to re-examine the valuation of the defunct KASB Bank and labelled SBP’s role in the merger as “breach of statutory duty.”

According to SHC’s order, it was observed the central bank had not given adequate time to KASB Bank for meeting the obligatory requirements. KASB Bank was given a mere two days by the central bank to parley with its members, depositors and other shareholders in response to the merger proposal with BankIslami.

SHC lambasted the central bank for its incapacity to comply with regulations and termed it a failure on its part and agonizingly insufficient which it maintained was unreasonable.

Taking this into consideration, SHC in its decision directed the SBP to issue a notice to those individuals who were members of KASB Bank as on April 27, 2015, asking for complaints to the negative valuation of the entity as laid out in the scheme of the merger, within 30 days of this judgement.

Also, the central bank was ordered to undertake efforts to find the details of the persons mentioned above from the stock exchange, central depository company and BankIslami.

According to the order, a time of fifteen days had been given to the central bank by SHC from the publication on its website, as the time in which the objections can be received.

It is pertinent to mention that the auditor’s report regarding the valuation which was termed ‘confidential’ by the central bank would also be disclosed as per directives of SHC. Moreover, SBP had been ordered to release the auditor’s report in full, alongside the notice and its disclosure is mandatory for acquiescence with the judgement.

However, the SHC has made it clear the central bank is under no compulsion for providing any additional data beyond the disclosure of the full auditor’s report.

After these directives, the central bank would need to publish a reasoned and speaking order within 30 days after the final day for filing objections.

Earlier in May 2015, KASB Bank with a network of 105 branches and total assets of almost Rs67 billion was sold to BIPL at a token price of Rs1,000.

A bank is supposed to be well-capitalised, i.e. it should have the capacity to absorb losses on its assets and continue to remain solvent. As events transpired, SBP put KASB Bank under a moratorium in the middle of November 2014 for its lack of capitalisation.

In short, KASB Bank was not capitalised up to the regulatory requirements. Hence, it posed a risk to the banking system, according to the SBP. Any failure on its part to honour its financial obligations could possibly lead to system-wide repercussions.

Resonantly, the central bank froze the accounts of the bank, meaning big depositors and sponsors were not allowed to take out any funds. Moreover, SBP directly engaged KASB’s audit firm (Ernst & Young) that reviewed the bank’s financial statements and concluded that the enterprise had a negative net worth.

“… (The SBP) management amalgamated KASB Bank, having assets and deposits of Rs57 billion with BankIslami on May 7, 2015, without considering the market value of assets of KASB Bank or its shares price at the stock exchange…”, the AGP report for 2017-18 stated.

However, the language used in the AGP report remains unclear on whether Rs57 billion was the value of KASB Bank’s assets or deposits. For a bank, deposits are liabilities, not assets.

Simply put, deposits are funds that a bank owes to its clients. Just like an unpaid electricity bill, deposits represent an amount payable for the bank.

However, according to the SHC order, if the fresh valuation conducted by the central bank of defunct KASB bank is different to the one determined originally in the auditor’s report, it would need to fully compensate the shareholders within four months of the judgement.

Earlier, at the beginning of April, the central bank published a press release in response to media reports regarding AGP’s report on defunct KASB Bank which said “SBP would like to clarify that all the audit observations raised from the office of the AGP have been duly responded. Although the AGP observation is still at the stage of draft para, the entire reporting in both print and electronic media has distorted to give the impression as if the observation had attained finality.”

Profit demystifies the controversy over the sale of KASB Bank

“Further, they are one-sided and does not reflect the SBP’s point of view. It is reiterated that the SBP being the regulatory and supervisory authority of the banking system has legal mandate to safeguard the interest of the depositors and to ensure the stability and soundness of the banking system.

The decision concerning defunct KASB Bank has been taken on merit and in the valid exercise of jurisdiction under the Banking Companies Ordinance, 1962. Media is, therefore, advised to refrain from speculative reporting on audit paras that are yet to attain finality.”

Earlier, a recently released report of the Auditor General of Pakistan (AGP) office again alleged the BankIslami-KASB bank merger caused around Rs3.5 billion in losses to the national exchequer in addition to the already Rs6.6 billion reported in August 2017.

This disclosure was made in a live telecast of “Dunya Kamran Khan Ke Saath” on 29, March and said that a recently released AGP office report alleged State Bank of Pakistan hid losses to the tune of Rs3.5 billion and the amalgamation of these two banks was very dubious. 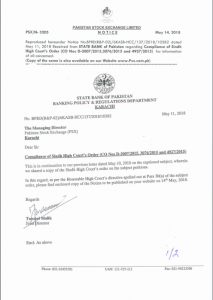 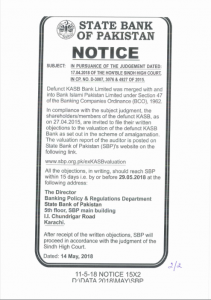