Pakistan has to submit an action plan for review by FATF in its meeting scheduled to take place from June 24 - 29. 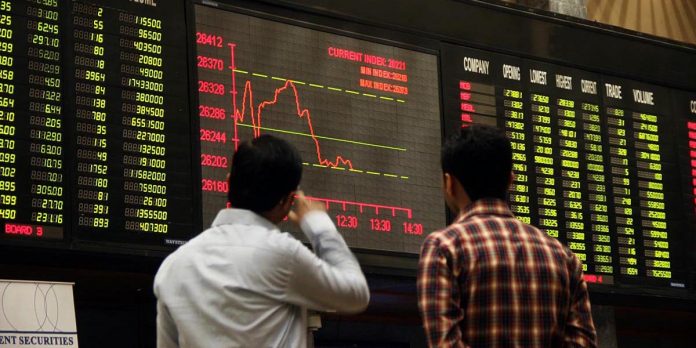 LAHORE: The Pakistan Stock Exchange (PSX) ended its winning run on the last trading session ahead of the long weekend. The finance ministry is in the process of drafting an action plan to avoid inclusion of Pakistan on the blacklist of countries that financially aid terrorism. Pakistan has to submit an action plan for review by Financial Action Task Force (FATF) in its meeting scheduled to take place from June 24 to June 29.

Following its historical upbeat in caretaker setup, Pakistan equities have so far provided a positive return of 2.4 per cent in first five sessions of interim setup against the average of 17 per cent in full tenure historically.

Foreign investors continued to upload for another week. They ended with net outflows of $29.55 million. Local insurance companies rescued the market concluding the week with net inflow of $17.95 million.

The KMI 30 index after initial rise of 321.98 points dropped 204.22 points below the previous close. The KSE All Share Index depreciated 112.05 points during the day. The advancers to decliners ratio stood at 112 to 210.

The engineering sector remained the loss leader for the day. The sector took a 1.71 per cent hit on its cumulative market capitalization. Contrary to last sessions rally, the commercial bank sector lost 1.09 per cent from its market cap. Chemical and cement sector managed to inch up a little, 0.74 per cent and 0.68 per cent respectively.

During the outgoing week, benchmark index went up by 2.4 per cent or 1,035 points where Banking scrips clasped investors’ attention amid their enticing valuation and anticipation of higher interest rate going forward. Among top banks, United Bank (UBL) went up by 8 per cent, Habib Bank (HBL) 7 per cent, and MCB Bank (MCB) +4 per cent.

Market participation during the week has shown significant improvement, where volumes and value both went up by 54 per cent, and 62 per cent, respectively.

Foreigners remained net seller for the fifth consecutive week amounting to $29.5 million vs. net selling of $17.5 million last week. On the other hand, amongst local investors insurance were net buyers of $17.9 million whereas individuals were net buyer of $4.9 million.

Treet Corporation (TREET) in its extraordinary general meeting (EOGM) passed resolution to raise funds up to Rs1 billion through rated, listed, secured, perpetual, and convertible instruments of redeemable capital in form of Treet Perpetual Sukuk subject to the approval of relevant authorities.

The World Bank (WB) has lowered down its projections for Pakistan’s GDP growth to 5 per cent against officially envisaged target of 6.2 per cent for the financial year 2018-19 on the basis of the possibility of adoption of tighter policies to improve macroeconomic stability.

Caretaker Prime Minister Justice (retd) Nasirul-Mulk has directed the Finance Division to formulate a comprehensive strategy containing immediate measures as well as a blueprint of the long-term structural reform package for the consideration of the incoming elected government.

The public sector enterprises’ (PSEs) debt has almost soared to Rs1 trillion at the end of third quarter of FY18, State Bank of Pakistan (SBP) reported in its latest issue of Statistical Bulletin for June.