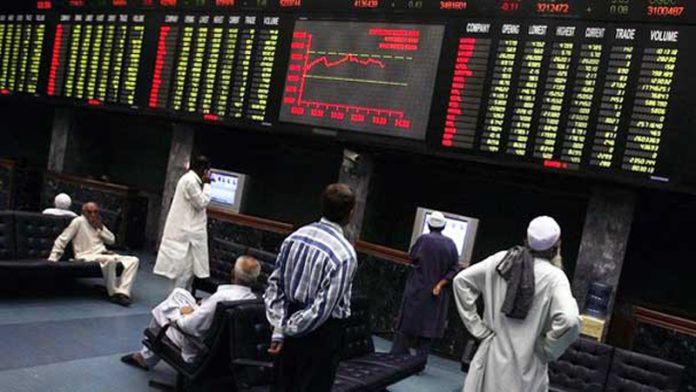 LAHORE: In the aftermath of central bank increasing its policy rate ahead of a tense national vote to 7.5 per cent from 6.5 per cent over the weekend, Monday started on a buoyant note largely on the back of gains in Financials.

However, hope turned to despair as the Pakistani rupee dropped sharply in early trade in what appeared to be another round of devaluation by the central bank (fourth intervention since December). The USD-PKR pair was trading at around 128/128.5 per dollar at 4:00 pm local time.

The central bank last devalued the rupee by about 4 per cent in June, after weakening the currency by about 10 per cent during interventions in March and December. The day ended with the 100 Index closing down 605.23 points (-1.5 per cent) at 39,665.77.

The 100 Index volume expanded on d/d basis (+6.9 per cent) amid renewed fear of index losses. Traded value was however flattish (-2.60 per cent) on d/d basis as local institutions opted to stick to sidelines.

In related news, DRAP has issued recall alert for critical heart medicine due to impurity found in raw materials of “Valsartan” that is manufactured by M/S Zhejiang Huahai Pharmaceutical Co. Ltd, China. On the political front, Nawaz Sharif, his daughter Maryam Nawaz, and son-in-law Mohammad Safdar challenged their convictions by an accountability court in the Avenfield corruption reference in the Islamabad High Court.