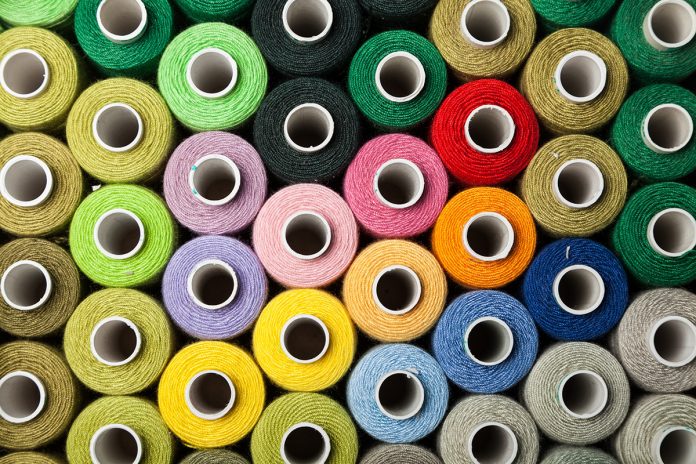 Almost every industrialist and trader sounded dejected at the policies of the Pakistan Muslim League-Nawaz (PML-N) and Pakistan Peoples’ Party (PPP) governments over the last 10 years. To them, the anti-business and anti-trade policies did not allow them to run their industries and businesses to garner optimum yield, lead to lesser growth and greater inflation, increasing pressure on valuations and cost of doing business in Pakistan.

The main reasons behind this dejection were the non-availability of utilities and higher cost of electricity and gas. Without cheap utilities, the industry pundits claim, the factories and businesses cannot be run efficiently.

During the last 10 years of democracy, the governments of PML-N, PPP, and Pakistan Tehreek e Insaaf (PTI) failed to overcome the power crises in the country, blaming each other for it. To them, the country’s export could not be enhanced without electricity, gas, and water.

The wrong policies of the previous governments hit the exports while the imports increased at a breakneck pace, with the trade gap surging to over $27.9 billion in the last eleven months.

According to the economic experts, the Pakistan exports would rise to $25 billion in 2017-18, up by 13-14 percent compared to the last fiscal year, though imports touching $56 billion or above during the same period, remain a major issue.

The profitability of each exporting textile company surged by 10-15 percent while its workers remained where they were a decade ago because of rising inflation and devaluation of the Pak rupee.

The enormous size and import

The Pakistani textile industry combined is the 8th largest manufacturer in Asia, contributing 8.5 percent to the country’s GDP, while employing about 45 percent of the total labour force (38 percent of it being manufacturing workers). 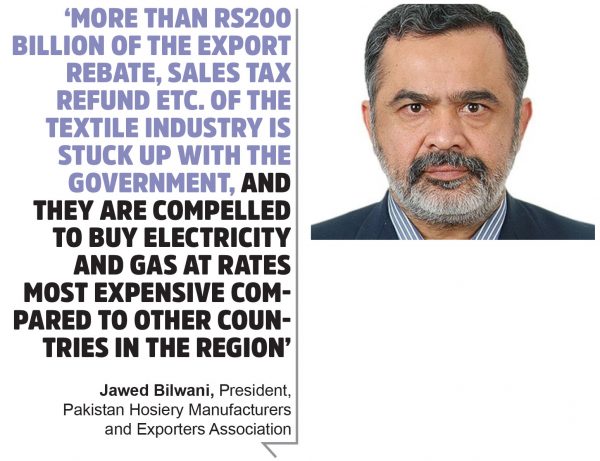 Textile is the most important manufacturing sector of the country and has the longest production chain, with inherent potential for value addition at each stage of processing – from cotton to ginning, spinning, fabric, dyeing and finishing, made-ups and garments. The textile products have maintained an average share of about 62 percent in national exports.

“More than Rs200 billion of the export rebate, sales tax refund etc. of the textile industry is stuck up with the government, and they are compelled to buy electricity and gas at rates most expensive compared to other countries in the region. Even the water has to be procured through the tanker mafia,” said Jawed Bilwani, president of Pakistan Hosiery Manufacturers and Exporters Association.

Despite all this chaos, Pakistan’s exports have gone up this year, and all its credit goes to the exporters and not to the government, added Bilwani.

“The government has not given us any major incentive in the last 10 years. So, on what basis is the government expecting a major upsurge in exports,” questioned Bilwani, a business leader who is president of the SITE Industries Association.

Last year the government announced a package of Rs180 billion in 2017, said he, adding, “but it has released only Rs25-30 billion. Subsequently, the finance ministry has linked this package with the growth.”

The industry cannot be run without energy and financing. The past and present government never considered releasing the stuck up money. “If released, this stuck-up money may bring more dollars through higher exports,” said Bilwani, adding, the exporters were waiting for it. 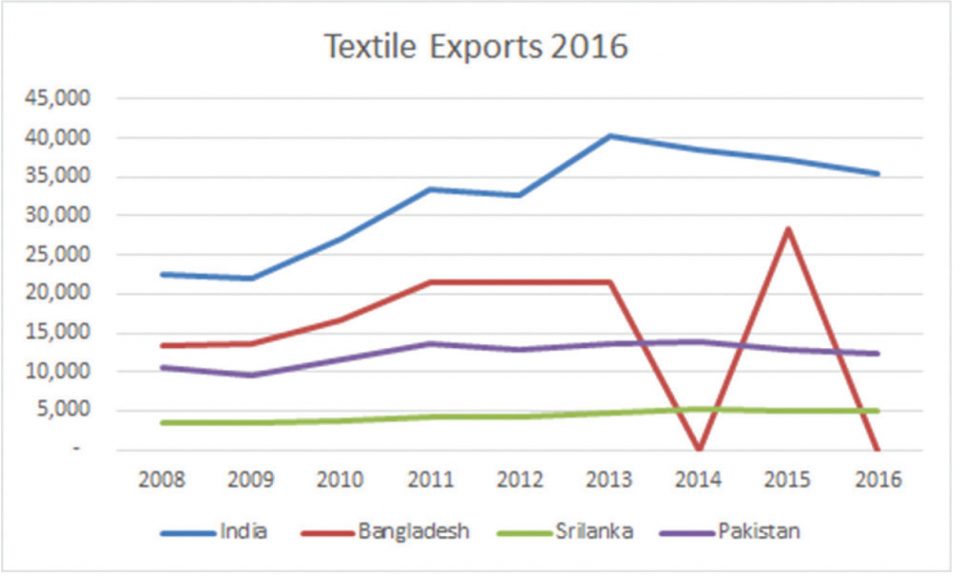 The decision of the finance ministry to devalue the local currency further hurt the profits of local exporters and 20 percent depreciation in Pak rupee made the imports of raw material more expensive.

“Devaluation of the local currency was the wrong decision of the [previous] government and it will put the external account under pressure instead of supporting the exports,” Bilwani claimed.

The exporters said when the government devalues the local currency, foreign buyers demand the share of the devaluation. The exporters get nothing from such measures, while they have to face costly import of raw materials, they claimed.

The president of Pakistan Textile Exporters Association (PTEA) said, the stuck up payments create liquidity problems for the exporting units – the main hurdle in getting optimum industrial growth.

Giving details, he said that Rs30 billion of textile exporters have been withheld in the sales tax regular refund regime, whereas another Rs10 billion have been withheld on account of custom rebate and Rs 15 billion under income tax credit. Similarly, incentives allowed under textile policy 2009-14 also remain unpaid with Rs20 billion being outstanding under TUF schemes, he said.

Another Rs10 billion under markup support and Rs3 billion are stuck up under the DLTL (Drawback on Local Taxes and Levies) scheme. In addition to that, an amount of Rs21 billion is also unpaid against duty drawback of taxes under the Prime Minister’s Trade Enhancement Initiative, he noted.

Zahid Mazhar, senior vice-chairman, All Pakistan Textile Mills Association (APTMA) has recently welcomed Chinese interest to relocate their industry in Pakistan. He invited them to take advantage of liberal trade and investment policies of the Pakistani government by entering into joint ventures with the Pakistani entrepreneurs in the textile industry.

Highlighting the trade and investment policies of the government, Zahid Mazhar said that the government of Pakistan is an advocate of an open deregulated and market-driven economy, creating enabling environment by investing heavily in infrastructure and capacity building, special emphasis on attracting foreign investment and duty-free import of machinery, equipment, and raw material.

Despite all the furore from the textile industry, analyst Shanker Talreja of Topline Securities said, the profitability of the textile sector increased by 10 percent in the current fiscal year, while the financial cost of the companies declared in the quarterly result is 30 percent.

“Every listed or non-listed textile company has gained profit in the fiscal year 2017-18 from the share of Rs180 billion,” the analyst claims. Major profit of the textile companies occurred from the depreciation of the Pak rupee, (half of which was passed on while the other half was profit).

“The main reason for the rising cost of doing business is the stuck-up export rebate and others incentives, which is around Rs 200 billion,” the analyst claimed.

Pakistan’s textile industry has experienced decreasing investments over the last decade, as potential investors have been hesitant to make new investment due to high business costs. This has caused the sector to miss out on technological advantages to its competitors.

The All Pakistan Textile Mills Association (APTMA) announced that its members have a plan to increase investment in Pakistan’s textile industry by establishing 1,000 garment manufacturing plants with a total of $7 billion in investments, the association said.

The plan is to set up garment plants near major textile producing cities like Lahore, Sheikhupura, Faisalabad, Kasur, Multan, Sialkot, Rawalpindi, Karachi, and Peshawar, with the plants installing half a million stitching machines, which will boost annual production to 3 billion pieces.

New investments dropped to more than half a billion rupees ($4.52 million) in 2016-17, compared to Rs 1 billion ($9 million) in 2005-06, the association said. Further, currently, about 35 percent of the textile industry’s production capacity was damaged, causing loss of approximately $4.14 billion worth of potential exports.

While the textile sector performed poorly overall, readymade garments did show reasonable growth. According to the Pakistan Bureau of Statistics, the exports of readymade garments registered 13 percent year-on-year growth in July-May 2017-18, which stood at $2.346 billion in 2017-18. Total exports of the textile industry grew by 9.82 percent in the last eleven months, to $12.336 billion. During the period, Pakistan’s textile exported cotton yarn worth $1.247 billion, cotton cloth $2.015 billion, knitwear $2.460 billion, bed-ware $2.055 billion, towels $736 million.

The APTMA members have reportedly provided the government with a long list of corrective and conducive policy measures in return for their investments, including implementation of long-term policies, like consistent nationwide energy prices, removal of Rs3.50 (3 cents) per kilowatt-hour surcharge on electricity tariff, an extension of the duty drawback scheme for five years and drawbacks to be increased every year by 1 percent for garments (up to 12 percent) and made-ups (up to 10 percent) against realisation of export proceeds.

Textile manufacturers in their budget proposal to the government have requested to decrease the cost of doing business primarily through decrease in electricity tariff in line with regional players.

Similarly, manufactures have also proposed for the timely release of pending refunds, continuation of the drawback duties and the reduction/elimination of the customs duties on import of synthetic yarn and Polyester Staple Fiber (PSF).

According to data released by the central bank, the gap was $1.9 billion in May. This was nominally down from the preceding month, data showed. The current account tracks a country’s overseas transactions, such as net trade, earnings on cross-border investments and transfer payments.

It projected the current account deficit for the financial year 2017-18 to be 4.2 percent of GDP and reserve coverage of external debt repayments was sufficient for now but projected it to erode.