Has CPEC hit a major roadblock? 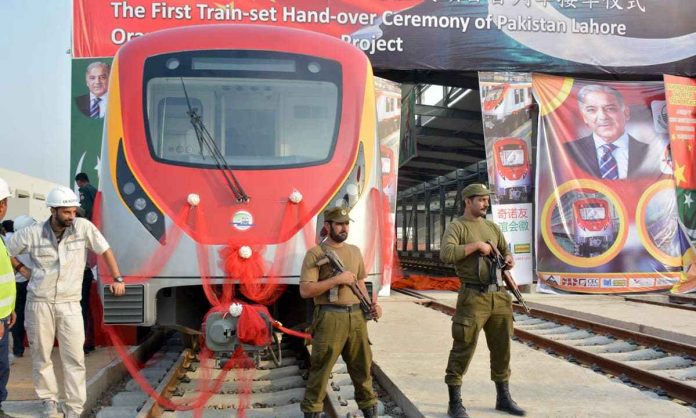 LAHORE: In what many term as a strategic move to increase political and economic influence, China has portrayed Pakistan as the Champion for its One Belt One Road (OBOR) initiative which is spread across some 70 nations. With the likes of Malaysia – the second-biggest recipient of Belt and Road loans after Pakistan, Myanmar and Nepal now halting or renegotiating OBOR projects, China’s luck in Pakistan seems to have run out along with the outgoing Pakistan Muslim League Nawaz (PML-N) led government.

According to a report published by the Wall Street Journal (WSJ), Pakistan’s first metro under the China Pakistan Economic Corridor (CPEC), the Orange Line, which was supposed to be an early triumph for China to subdue US influence in Pakistan has now become embattled with trouble and has in fact become a statement in favour of China’s “debt-trap diplomacy.”

Pakistan now faces a severe debt crisis and is most likely to opt for a bailout programme from the International Monetary Fund (IMF). And since, the US being the majority stakeholder in the said fund, China’s ‘power show’ seems to have hit a roadblock. It is expected that once Pakistan opts for a bailout, much of Pakistan’s borrowing and spending would be restricted under the terms of the fund.

However, it is also very likely that China in a bid to prevent that from happening might just offer an IMF-style bailout programme, which will turn the odds in China’s favour. It has been rumoured that the PML-N led government had made several attempts to avail a Chinese bailout, however, given the recent political developments and Nawaz Sharif’s imprisonment, Beijing is waiting for the next government to take charge.

On the contrary, China is now growing more concerned regarding the financial implications of OBOR projects under CPEC and Pakistan’s ability to pay back loans. In its latest guidance to Chinese companies investing in Pakistan, published in March, China’s tax administration warned that Pakistan’s capacity to repay debts “is extremely low.” Returns on Chinese investments in Pakistan were “very low, and some may become bad debts,” it said.

Although Chinese banks have already provided emergency loans worth $3 billion at commercial rates to stabalise foreign exchange reserves, senior Pakistani officials believe that Pakistan requires a bailout to the tune of $8 billion to $10 billion. Considering that China is estimated to have provided loans worth $200 billion for OBOR projects since 2013, Pakistan is in a compromising position.

Meanwhile, Nadeem Javaid, chief economist of Pakistan’s planning ministry, suggests China should rescue Pakistan with an interest-free loan. “It would be a kind of favour,” he says. If not, “for what do we have this friendship?”

Meanwhile, others speculate that a Chinese bailout reaffirms the fact that Beijing is using CPEC style initiatives to extract onerous concessions, including equity in strategically important assets.

Unable to repay Chinese loan for a part in Hambantota City, Sri Lanka’s government leased the port/facility to a Chinese firm for 99 years. While the US and India have been long speculating that China wanted to establish a naval outpost in the region, which China denies.

Some speculate that China aims to achieve the same with Gwadar port.

Despite the criticism, some diplomats believe that given the strong Pakistan-China friendship and mutual interests, China will continue to literally throw money at Pakistan.

But, China has also grown anxious about the increased probability of Islamic extremism spreading from Pakistan into China. Hence, some argue that China’s interests in Pakistan now heavily rely on Pakistan’s political and economic stability.

Countries around the world including US, India and the European Union have criticised the OBOR initiative as being a tool to impose a strategic plan to redraw the world’s geopolitical map through opaque deals often contingent on using Chinese contractors. Moreover, many Pakistani officials and politicians, including the opposition leader Imran Khan have voiced their concerns over the transparency deals under CPEC. And now many outgoing ministers, who were part of the negotiations with their Chinese counterparts agree that they should have cut better deals with China.

Financed and built by Chinese state-run companies, the soon-to-be-finished overhead railway through Lahore, the orange line, is among the first projects in China’s $62 billion plan for Pakistan under CPEC. Beijing hoped that the mega $2 billion air-conditioned metro would present a strong case for its global infrastructure-building spree under the OBOR initiative, that many term as a US Marshall Plan-type move that helped rebuild Europe after World War II.

Moreover, projects like the orange line require government subsidy to remain operational. Interestingly enough the mega-metro project was not part of CPEC initially, however, was later added on upon ousted prime minister Nawaz Sharif’s request, which subsequently raises more concerns regarding the project’s economic viability.

With the general elections lurking around the corner and Pakistan falling behind on payments for electricity from new Chinese power projects—the bulk of the infrastructure programme, many are calling for renegotiations and less-generous perks for the Chinese counterparts.

Moreover, due to the uncertainty Chinese projects in Pakistan are now vulnerable to chopping including an $8 billion railway upgrade central to Beijing’s vision of a new overland trade route, which would link China’s northwest to Pakistan’s Arabian Sea coast, Pakistani officials say. The upgrade aimed to double the average speed on 1,170 miles of track between the port of Karachi and the northern city of Peshawar.

“I cannot see how the money would be repaid” for the upgrade, says one senior Pakistani official involved in discussions with China.

Meanwhile, China and Pakistan both remain optimistic and say that of the 43 CPEC projects due to be finished by 2030, around half—worth $19 billion—are completed or underway, including a dozen power plants. Much of the infrastructure is badly needed, especially the energy projects, which will help ease Pakistan’s chronic electricity shortages.

The WSJ report highlighted that official figures show that Chinese-backed power plants were promised annual returns on investment of up to 34 per cent, guaranteed by Pakistan’s government, in dollars, for 30 years.

Although it has been projected that projects under CPEC would boost economic growth from 5.8 per cent to a whopping 7 per cent by 2023, essentially allowing Pakistan to service its debts, many remain sceptical, including the IMF. In a recent report, IMF predicted Pakistan’s growth rate to flatline at 5 per cent through to 2023.

“The new government will have to do some adjustment, with us or without us,” says Teresa Daban, the IMF representative in Pakistan.