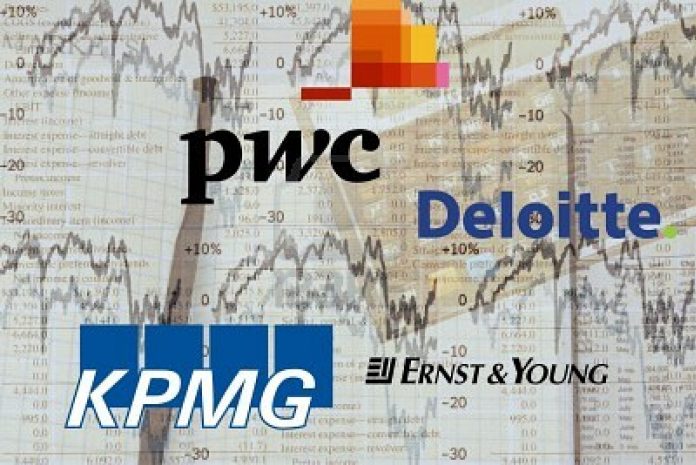 LONDON: Britain’s top accountants will meet with competition regulators next week to discuss limiting the “Big Four” auditors’ market share after lawmakers called for them to be broken up.

Lawmakers have accused EY, KPMG, Deloitte and PwC of being an “oligopoly” that checks the books of nearly all the 350 leading companies in Britain, with smaller rivals barely having a look in.

After the collapse of outsourcer Carillion in January, a parliamentary committee said the Competition and Markets Authority (CMA) should consider breaking up the Big Four into more audit firms and detaching audit arms from consulting services.

Faced with this, accounting industry officials began thrashing out proposals for limiting how many big company audits the Big Four should be allowed to conduct.

Smaller auditing firm Grant Thornton said earlier this year it would give up bidding for top company audits because it always came a “glorious second” in a costly exercise that saw audit committees sticking with a Big Four firm.

Officials from the Big Four, smaller rivals Grant Thornton, RSM, Moore Stephens, Mazars and BDO, as well as professional accounting bodies ICAEW and ICAS, held a conference call on Friday to finalize the proposals before presenting them to CMA staff next Tuesday.

“We had all the UK CEOs on it to get their support, that they are happy with the things that are going to be talked about,” ICAEW Chief Executive Michael Izza told agencies on Friday.

The recommendations include a cap on how many of the 350 biggest companies a Big Four firm can audit, and having audits shared or done jointly by a Big Four firm and smaller rival.

The Big Four could also license their technology for smaller rivals to use.

A more radical idea aimed at changing “buyer behaviour” recommends that an independent body selects the auditor for companies, a task currently left to a company’s audit committee.

“That causes some challenges with company law and would be a challenging sell to audit committees, but perhaps the time has come to look at some of the more radical options. That mechanism works well in the public sector,” Izza said.

The CMA said it was continuing to monitor the audit sector to decide whether to take further action, and it was working with the sector’s regulator, the Financial Reporting Council, to support any action that watchdog chose to take.

Izza said the discussions have kept regulators, lawmakers and the government in the loop. “This is not being done in an environment of secrecy. It’s being done recognizing there is an issue here,” Izza said.

Some of the ideas were already raised by competition regulators in a 2013 review that ordered Britain’s top 350 companies to put out their audit work to tender at least every decade to avoid accountants becoming too cozy with management.

The outcome, however, is a switch between Big Four firms, rather than greater market share for smaller auditors.