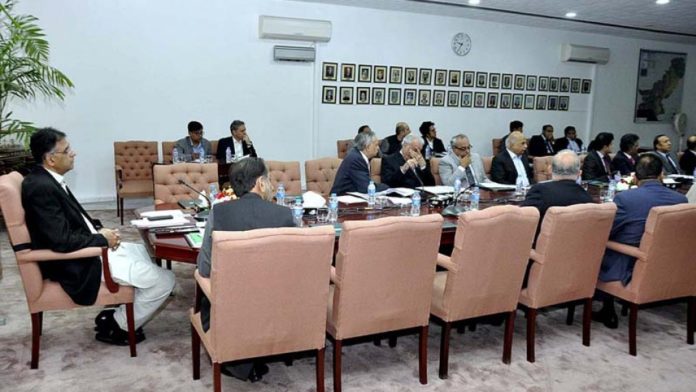 ISLAMABAD: The Economic Coordination Committee (ECC) of the federal cabinet Tuesday postponed the decision of electricity tariff hike for one week owing to the absence of the energy minister, while approving a mechanism for supply of uninterrupted gas to zero-rated export-oriented industries during the winter months.

The government is poised to take decisive action regarding increase in electricity tariff in a bid to avoid Rs420 billion in annual subsidies. However, at the same time, provision of subsidised gas to five export-oriented sectors that would cost taxpayers Rs63.5 billion has been approved.

It is pertinent to note that ECC has allowed supply of imported re-gasified liquefied natural gas (RLNG) to five Punjab-based industries at half the existing prices despite having no budgetary allocation.

The Rs63.5-billion subsidy for textile, carpet, leather, sports and surgical goods industries will be given by issuing a supplementary grant, according to officials of the finance ministry.

Sources told Pakistan Today that the ECC meeting held under the chairmanship of Finance Minister Asad Umar has approved a mechanism to ensure enhanced supply of domestic gas to the five zero-rated sectors of the industry.

Addressing a press conference after the meeting of the ECC, Federal Minister for Information Fawad Chaudhry said that the government will soon take decisive steps on the electricity price increase. He also said the ECC did not take decision on power tariff increase due to absence of Power Minister Omar Ayub, who is in China.

The minister said that the current electricity sale price of Rs11.71 per unit had shot up due to the setting up of expensive power generation plants and net hydel profit payments to provinces by the last PML-N government.

Against the Rs11.71 end-consumer price, the cost of generation was earlier Rs12.90 per unit and the government was bearing a subsidy of Rs1.19 per unit, he added.

The minister said that a deficit of Rs 1.2 billion was being incurred daily in the winter months and Rs1.8 billion in the summer months.

“As a result of these losses, circular debt is ballooning by thirty-four to thirty-six billion rupees every month.”

It is pertinent to mention that this is the fourth time the government is deferring the matter of power tariff hike. Tuesday’s ECC meeting was also set to announce a hike in power tariffs, but a decision on the matter could not be made due to the absence of the energy minister.

After an increase in the gas tariff, the government was expected to increase the price of electricity by Rs3.75 per unit.

Sources said that the government had on Monday instructed to prepare a summary regarding a hike in power tariffs. They added that with the recommended rise in power tariff, an additional Rs400 billion per month was expected to be collected from consumers.

The power division has suggested an increase of Rs2.20 per unit, almost 35-39 per cent increase for domestic consumers with monthly consumption of 300-700 units, and about 26 per cent average increase for lower slabs of below 300 units, according to sources. They added that the division has estimated the impact of past losses, inadequate recoveries, late notifications and other inefficiencies etc. at about Rs2.30 per unit, requiring an average Rs1.60 per unit hike in the power tariff.

It is worth mentioning that the ECC has been struggling to decide on the electricity tariff increase worked out by the National Electric Power Regulatory Authority (NEPRA) under policy guidelines from previous government, envisaging higher cost of inefficiencies and theft charged to paying consumers.

NEPRA calculated a Rs3.90 per unit increase in power tariff and had suggested that after accounting for the existing subsidy allocation in the budget, government has to increase average power tariff by about Rs2 per unit.

The ECC meeting was also given a briefing on the LNG terminals agreements signed by the previous government. The meeting decided that the facts, ascertained after discussion, will be shared with the federal cabinet in its next meeting.