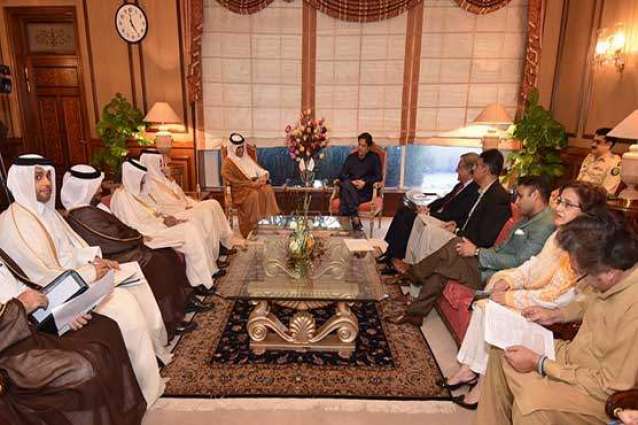 He also expressed hope for early implementation of Qatar’s decision to import 100,000 workers from Pakistan.

The prime minister expressed these views while talking to Sheikh Mohammad Bin Abdul Rahman Al Thani, Deputy Prime Minister and Minister for Foreign Affairs of the State of Qatar, who called on him to convey the felicitations and best wishes of Amir of Qatar on his elections.

The Qatari foreign minister conveyed the keen desire of the Amir to work with the new leadership in Pakistan in order to further strengthen close and cordial relations between the two countries.

Expressing appreciation for the warm sentiments of Sheikh Tamim bin Hamad Al-Thani, the prime minister reciprocated by underlining the commitment of his government to build mutually beneficial relations with Qatar, for the benefit of the two peoples.

Referring to increase in Pakistan’s exports to Qatar, he hoped that bilateral trade would further expand in the coming years.

Sheikh Mohammad Bin Abdul Rahman Al Thani thanked the prime minister for receiving him and reciprocated the sentiments and assured him of the full support and cooperation of the government of Qatar in attaining the dream of a progressive, prosperous and forward-looking Pakistan.

The prime minister conveyed his best wishes for continued peace, progress and prosperity of the State of Qatar, under the leadership of Sheikh Tamim bin Hamad Al-Thani.