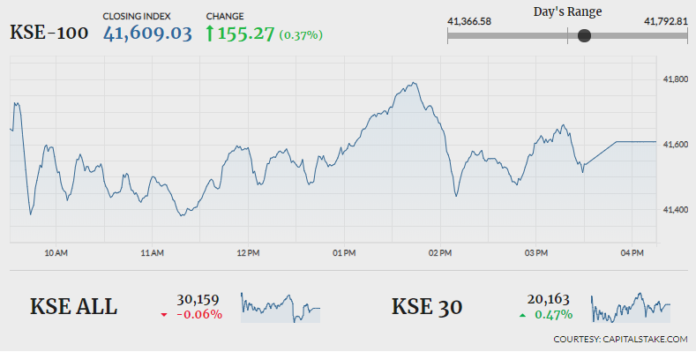 KARACHI: After putting up a confused show on Tuesday, the Pakistan Stock Exchange (PSX) managed to end the session in green.

The mood of foreign investors has not changed yet, ending as net sellers on Monday with a net outflow of $9.31 million.

Trading volumes declined from 461.07 million in the previous session to 327.81 million. The Bank of Punjab (BOP -0.92 per cent) was the volume leader for another session with 33.03 shares exchanging hands, followed by Pak Elektron Limited (PAEL -3.97 per cent) and TRG Pakistan Limited (TRG -3.17 per cent). The scripts had traded 24.46 million and 22.85 million shares respectively.

Dawood Hercules Corporation Limited (DAWH +2.67 per cent) declared its financial performance for the third quarter of 2018. An interim cash dividend of Rs3 was announced by the company. It’s revenue remained constant while the earning per share increased from Rs1.92 in the same period last year to Rs2.47 in the current year.

Pak Elektron Limited (PAEL -3.97 per cent) released its financial results for 3QFY18. Sales were up by 23 per cent QoQ, while earning per share declined by 4 per cent QoQ (3QFY17 Rs0.24, 3QFY18 Rs0.23). The company’s gross profit margin decreased compared to the same period last year due to an increase of 30 per cent in the cost of sales.