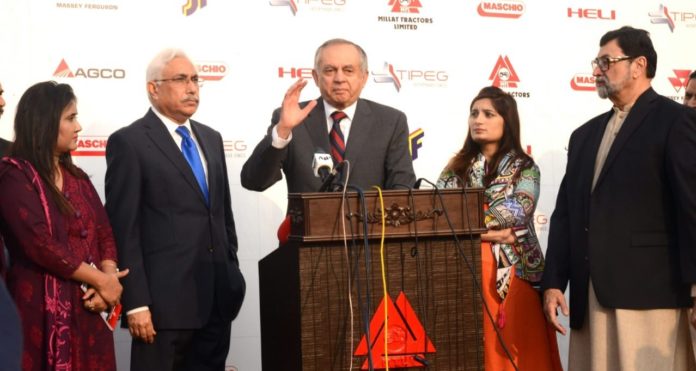 LAHORE: Advisor to Prime Minister on Commerce, Textile, Industry and Production and Investment Abdul Razak Dawood Friday said that economy of the country would improve in the months to come as Pakistani products were being exported.

Talking to the media after the inauguration ceremony of the export consignments of Millat Tractors to Africa, he said that other parts would also be exported which would also promote the small industry.

He said, “The cost of products would reduce if we assemble goods in the country. After tractors export, we will export motorcycle as well.”

The advisor to PM added, “I am going to Japan for capital and skills’ fund. We have to focus on three major sectors, including engineering, chemical and IT. Chemical industry would also be focused.”

Speaking at the ceremony, Abdul Razak Dawood said that it was worth mentioning that Millat made products were competing in the global markets not only on account of price competitiveness but also good quality.

He reiterated that value-added engineering products could earn plenty of much-needed foreign exchange for the country meanwhile making it self-sufficient by meeting the local market demand. He added that it was heartening to note that Millat had taken the lead in the automobile sector by setting up a board base and exporting its products successfully in the global markets which had resulted in saving and earning of foreign exchange besides projecting a positive image of the country worldwide.

Meanwhile, Abdul Razak Dawood was briefed that the company products including Millat made Massey Ferguson tractors, tractor engines, electro-pack engines, assemblies and sub-assemblies of spare-parts are being exported to Europe, Africa, South Asia, Turkey and Australia.