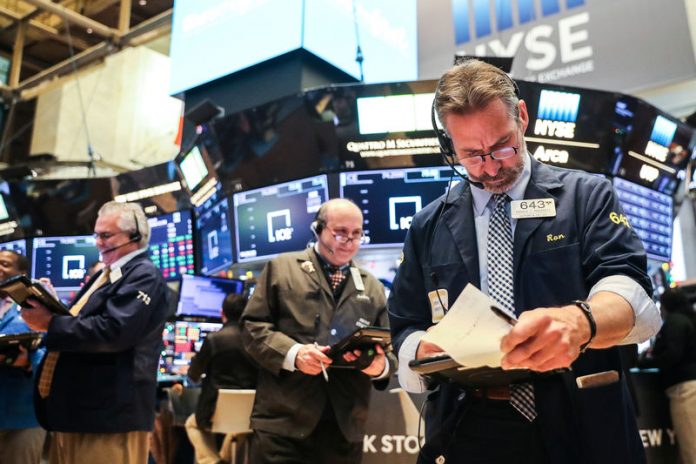 US stock indexes jumped on Monday in a broad-based rally driven by growth sectors, as signs of progress in the US-China trade dispute set up Wall Street to end its worst year in a decade on an upbeat note.

US President Donald Trump said he had a “very good call” with China’s President Xi Jinping on Saturday to discuss trade and that “big progress” was being made.

“The progress cited by Trump on trade talks and a continuation of last week’s rally are lifting investor spirits,” Peter Cardillo, chief market economist at Spartan Capital Securities, said in a client note.

The trade-sensitive S&P industrials sector rose 0.87 per cent, driven by gains in Caterpillar Inc and Boeing Co, which was the biggest boost to the Dow Industrials.

The technology sector, housing companies that have major exposure to China, rose 0.72 per cent, while gains in Amazon.com Inc and Netflix Inc helped send the consumer discretionary sector 1 per cent higher.

But the biggest gain was among health stocks, the best performing sector this year, which rose 1.29 per cent. The defensive utilities and real estate sectors fell.

Last week started with the benchmark S&P 500 and Dow Jones Industrial Average coming within a whisker of a 20pc decline from their closing high — also known as bear market territory — before rallying after Christmas to end the week higher after three straight weeks of losses.

Still, the S&P 500 down over 9pc so far in December, was its biggest monthly drop since February 2009 and its worst December since the Great Depression.

The S&P is down over 6pc this year, while the Dow is down nearly 6pc, both snapping two-year winning streaks to post their biggest yearly drop since 2008, during the throes of the financial crisis. The Nasdaq has snapped a six-year winning streak to drop about 4 percent this year.

Most of the damage was inflicted in the past three months as worries about Sino-US trade frictions, US interest rate hikes, slowing corporate profit growth, Brexit and the partial US federal government shutdown, entering its 10th day, formed a perfect storm across global financial markets.

Many of these concerns will carry over into 2019, but for this week, the major point of interest will be key US economic reports, including on manufacturing and employment.