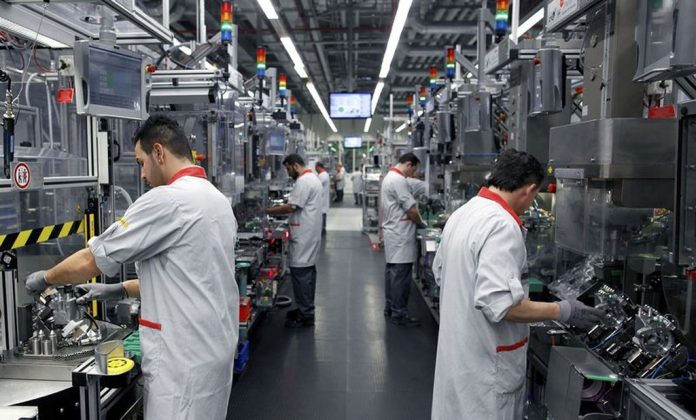 WASHINGTON: US manufacturing dropped sharply for the second consecutive month in February with across-the-board declines in nearly every category of product, the Federal Reserve reported on Friday.

The decline kept overall industrial production from rebounding as analysts had forecast, despite a surge in the volatile utilities component.

The weakness, which many economists say will continue this year, is a blow to President Donald Trump’s aggressive trade policies which have been focused on boosting American manufacturing, even as it makes up a dwindling share of the US economy.

And economists attribute some of the weakness to the slowdown underway in China, in part the result of Trump’s trade war with the world’s second largest economy.

Total industrial output eked out a gain of 0.1pc, after falling 0.4pc in January — slightly better than originally reported — helped by the 3.7pc surge in utilities, according to the monthly report.

But manufacturing fell 0.4pc after a 0.5pc decline in the prior month, even though January’s decline was an improvement on the 0.9 percent drop originally reported.

Within the manufacturing sector, the negatives were widespread, including losses of about 2pc for nonmetallic mineral products and machinery.

He said, “A broad-based softening is underway, and we’re sticking to our view that the sector will be in recession through mid-year.”

However, manufacturing accounts for only 12pc of GDP, “so a short and relatively mild downturn in the sector is not going to pull the rest of the economy into the mire, but it will be a constraint on overall growth in both GDP and employment,” Shepherdson said in a research note.

Output of motor vehicles and parts saw just a small dip, which was good news after the 7.6pc drop in January, while computers and electronic products gained more than 1pc.

The drop in motor vehicle production was essentially cancelled out by the gain in parts output. But excluding those two, total output was down 0.2pc, according to the report.

Mining output, which includes oil and natural gas, rose 0.3pc for the second month in a row, marking the 13th consecutive monthly increase.

Total industrial production remains 3.5pc above February 2018, while manufacturing is up 1pc.

With the tepid output, total industrial capacity in use dipped for the third consecutive month to 78.2pc.

Mickey Levy of Berenberg Capital Markets notes that US output continues to perform better than other advanced economies.

But as global demand softens, he cautioned, “How long will US resilience last as the industrial slump spreads through other advanced economies and key trading partners?”