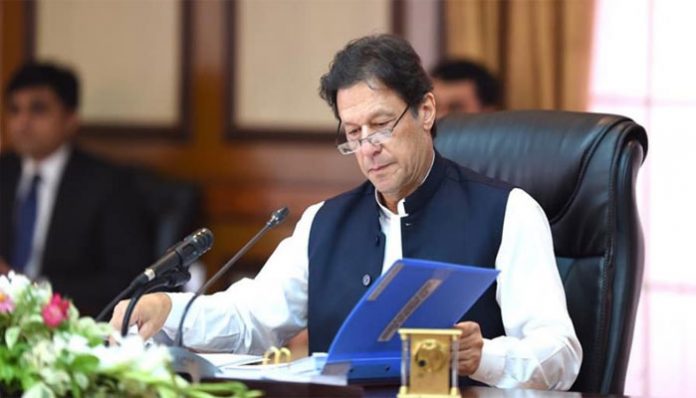 ISLAMABAD: Prime Minister Imran Khan chaired a five-hour long meeting of the federal cabinet in Islamabad on Tuesday to review the overall political, security, and economic situation of the country.

According to sources, the cabinet took several key decisions including the approval of a Rs290 billion National Agriculture Emergency Programme. The incumbent government had promised it would declare an agriculture emergency under its first 35 initiatives after coming into power in a bid to boost the profitability of farmers in the country.

Approving the Rs290bn programme, the cabinet recommended that steps be taken across Pakistan, including Balochistan, for the improvement of the agricultural sector.

Among other decisions, the cabinet approved a bill to slash the “Entertainment and Gift budget” of ministers and senior officials, calling for further recommendations on the matter in the next meeting.

The cabinet also approved the formation of a taskforce on the Evacuee Trust Property Board, a government department that administers evacuee properties, including educational, charitable or religious trusts left behind by Hindus and Sikhs who migrated to India after partition. The cabinet has sought recommendations from all concerned departments on the matter and called for members of minority groups to be made part of the task force, sources added.

The meeting was also briefed on the reforms process in the Federal Bureau of Revenue (FBR).

The cabinet members condemned the heinous terror attack in Christchurch and saluted the bravery of Pakistani national Naeem Rasheed who gave his life while saving fellow worshipers.

Prime Minister Imran Khan said that Pakistan condemns all form of terrorism and its an eternal truth that terrorists belong to no religion.

Meanwhile, addressing the media after the conclusion of the meeting, Information and Broadcasting Minister Chaudhry Fawad Hussain said that the government had decided to refund Rs2.5 billion that was charged extra by the Sui gas consumers in the shape of inflated bills.

The minister said that an inquiry was still underway and startling revelations were expected on its completion.

He said imports of agriculture products had reached $4 billion with edible oil costing $2 billion. “The government has planned to launch a campaign to reduce the consumption of cooking oil in order to save precious foreign exchange,” he added.

The government, he said, was also taking measures for the production of oil seeds, besides developing livestock and fisheries, which would strengthen the economy and increase per capita income.

The minister said the cabinet decided to devise a uniform system for the appointment of heads of regulatory bodies, corporations and attached departments of ministries on merit. “A committee headed by the respective minister would oversee the process and shortlist the names of potential candidates.”

He said the cabinet also decided to shift the Accountability Court No II from Rawalpindi to Islamabad.

He said the cabinet had discussion on the unutilized government land and formed a task force in that regard.