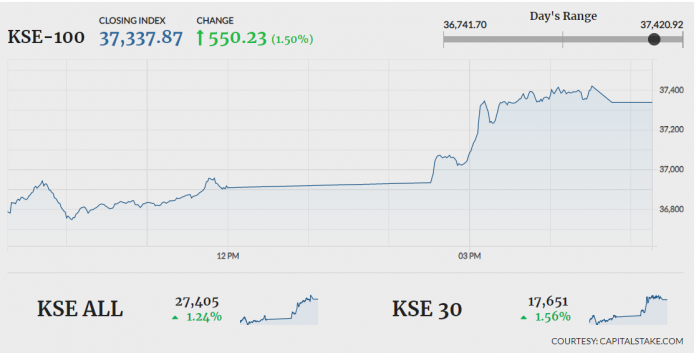 KARACHI: After few early bumps, the Pakistan Stock Exchange managed to stand its ground to end the last session of the week with gains.

Foreign investors continued to offload stocks worth $2.28 million on Thursday.

The positivity came on a media report that the policy board has decided to formulate a stock market fund to boost the investors’ confidence. The fund would reportedly be handled by multiple state-owned institutions together.

According to the latest data released by the State Bank of Pakistan, foreign exchange reserves fell by 2.1pc on a weekly basis and stood at $10.3 billion. The decline was due to external debt servicing and other official payments.

Attock Petroleum Limited (APL -5.00pc) declared its financial performance for the third quarter of FY19. The company’s sales improved by 8pc on a YoY basis, while its earnings per share declined from Rs14.60 in the same period last year to Rs2.86 in the current year.

Security Papers Limited (SEPL +5.00pc) also announced its financial results for the third quarter of FY19. Sales inched up by nearly 4pc on a YoY basis, while earnings per share dipped from Rs5.21 in the same period last year to Rs3.76 in the current year.