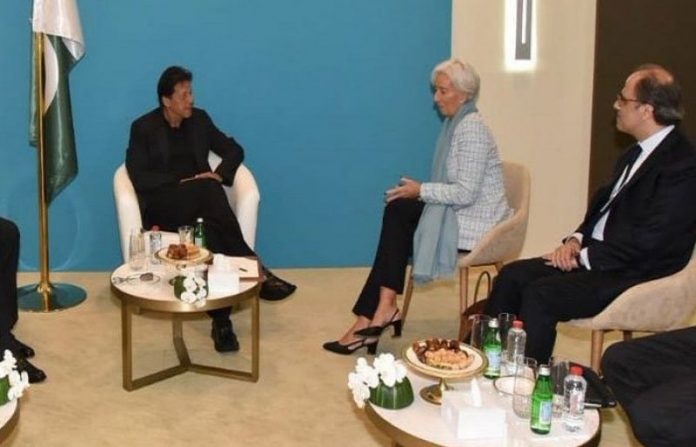 ISLAMABAD: The Pakistan Tehreek-e-Insaf (PTI) government and the International Monetary Fund (IMF) are likely to announce a staff-level agreement today (Friday), as the former has accepted most of the global lender’s demands — earlier termed harsh — that will lead to the unfolding of an inflationary budget expected to be announced on June 11 — loaded with taxes.

Both sides held the last round of talks a day earlier in which the remaining issues of the fiscal deficit and primary balance were finalised, sources in the Ministry of Finance said. They added that the country did not have any other option but to concede to the IMF’s demands to remain afloat.

Islamabad has also prepared the formal application for the loan programme which would be shared with the visiting IMF mission on Friday. State SBP Governor Raza Baqir will share the draft of the application with IMF representatives.

According to reports, a staff-level agreement is expected to be announced on Friday for a bailout program of $7-8 billion. It is worth mentioning here that the country already owes $5.8bn to the IMF on account of previous loans.

During their discussions on Wednesday, the two sides worked out a financing gap of around $11 billion for the next fiscal year, 2019-20.

Under the understanding, the government will start withdrawing exemptions offered in various taxes amounting to around Rs350bn in the budget for 2019-20.

The two sides also agreed that Pakistan would increase the costs of electricity and gas for the consumers in the next budget. However, reforms in the tax and energy sectors have been outlined in the list of top priorities. According to sources, the government will have to reduce subsidies and take Rs340bn from consumers in the energy sector only.

It has been agreed that the power sector regulator, the National Electric Power Regulatory Authority (NEPRA), would be made autonomous and the government interference to take popular decisions would be minimised.

Moreover, the State Bank of Pakistan (SBP) would be able to regulate exchange rates independently, and the rate of the US dollar would be set without any pressure from the government. This implies that the government is expected to allow a significant rupee depreciation and a key interest rate hike in 2019.

An official of the Finance Ministry confirmed that the financing gap for the next fiscal year had been projected at $10-$11bn. He added that the demand of the IMF for an increase in the policy rate by 100-200 basis points was also agreed upon. The policy rate is the interest rate announced by the SBP and is seen as a monetary policy instrument to regulate the availability, cost and use of money and credit.

Various measures aimed to build up foreign exchange reserves too have been agreed upon.

The official added that the IMF team pitched the GDP growth and current account deficit (CAD) on the lower side during the negotiations, however, a middle path was agreed upon.

The IMF was earlier stressing that CAD should be in the range of $4-$6bn, said the official. However, it was agreed that the deficit would be $8bn for the next fiscal year under the IMF programme.

The IMF team asked the government to take additional tax measures in the upcoming budget to make massive fiscal adjustments for moving towards surplus primary balance. The budget-making process would start only after the staff-level agreement is finalised.

A major challenge for the government is how to curtail budget deficit which is possible only through curtailing expenditures and enhancing revenues, but the country has a limited space vis-a-vis reducing expenditures.

“The IMF opposes reducing development budget, therefore, it too cannot be curtailed beyond a certain point. Hence the only option was to increase revenues,” the official added.

It has also been decided that the budget for the next fiscal year would be announced on June 11 as the Federal Board of Revenue (FBR) has expressed its inability to prepare tax proposals by May 22, which was the earlier date set for the budget announcement.