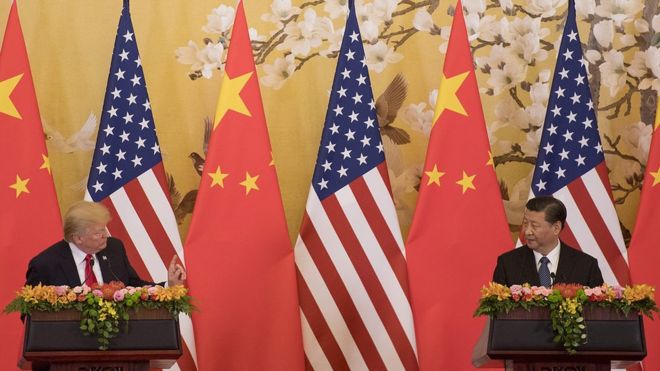 Shares of Huawei’s US suppliers also fell on fears the huge customer of US chips, software and other components would be forced to stop purchases after the US Commerce Department banned it from buying US technology without special approval.

Huawei said in a statement that losing access to US suppliers “will do significant economic harm to the American companies” and affect “tens of thousands of American jobs.”

“Huawei will seek remedies immediately and find a resolution to this matter,” the company said.

The US crackdown, announced on Wednesday, was the latest shot fired in an escalating US-China trade war that is rattling financial markets and threatening to derail a slowing global economy.

Chinese officials said US aggressiveness could hurt the trade talks, which appeared to have hit an impasse in the past week as the United States hiked tariffs on Chinese goods and Beijing retaliated with higher duties on US products.

Meng faces extradition to the United States on charges that she conspired to defraud global banks about Huawei’s relationship with a company operating in Iran. She and the company deny the charges.

While Canada says China has made no specific link between the detentions of the two men and Meng’s arrest, experts and former diplomats say they have no doubt it is using their cases to pressure Canada.

On Wednesday, the Commerce Department said it was adding Huawei and 70 affiliates to its “Entity List,” which bars them from buying components and technology from US firms without government approval. The sanctions have not yet gone into effect.

Lawmakers in the US Congress have long feared Huawei’s equipment could be used by the Chinese government to spy on Americans, and the Trump administration’s move has won bipartisan support in Congress.

Senator Roger Wicker, the Republican chairman of the Senate Committee on Commerce, Science, and Transportation, said on Wednesday it was “a necessary step to prevent the use of communications equipment that poses a threat to the United States.”

Senator Mark Warner, a Democrat and vice chairman of the Senate Select Committee on Intelligence, backed the executive order banning US telecommunications firms from buying from Huawei, as did other Democrats.

Warner called the decision “a needed step” but expressed concern about the prospect of other nations rebuffing US efforts to convince them to not use Huawei equipment for 5G, the next generation of wireless.

Warner also expressed concern about how the move would affect small U.S. rural carriers, who have relied on the cheaper Chinese equipment maker. He called a plan to replace the equipment “a potentially multi-billion dollar effort.”

Chipmakers Qualcomm Inc and Xilinx Inc were down between 3pc to just over 4pc on Thursday and were the biggest drags on the Philadelphia SE Semiconductor Index.

Shares of optical components maker NeoPhotonics Corp fell the most and were down 14.7pc.

Other suppliers like Analog Devices and Finisar Corp were both down about 2pc while Skyworks Solutions was down 4.4pc, Qorvo 5pc, laser sensor maker Lumentum Holdings was down 7.7pc, and memory chipmaker Micron Technology 2.1pc.

As signs emerge that consumers could feel the weight of the trade war with China, Walmart said US prices will rise due to higher tariffs on Chinese goods even as the world’s largest retailer reported its best comparable sales growth for the first quarter in nine years.