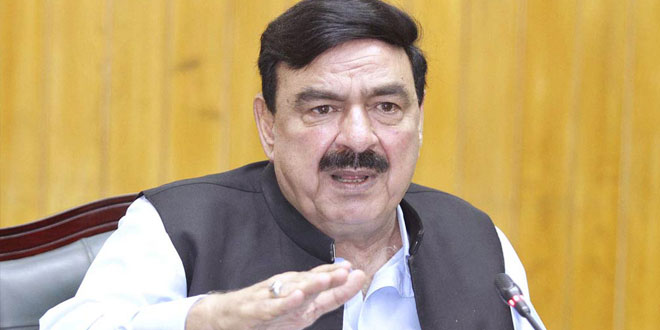 Addressing a press conference at the PR Headquarters on Saturday, Sheikh Rasheed said that maximum encroachments would be removed from Karachi Circular Railway (KCR) in 15 days and all-out efforts would also be made to clear all encroachments in one month.

The minister said he will go to Sukkur on Wednesday to check the railway track.

The PC-1 of Main Line 1 (ML-1) project was ready, he said, adding that the incumbent government was free of corruption which was why foreign investment was pouring in.

The establishment of Railway Constructions Pakistan Limited (RAILCOP) has been decided, he maintained.

He said Jaffar Express, Pak Business Express, Khyber Mail and Tezgaam have been allowed to make a stopover at Lahore Cantt Station in order to reduce the passenger flow at the Lahore Railway Station.

To a question, Sheikh Rasheed said 20 out of 30 trains were being run on profit while only four trains were in deficit, which would be managed.

In eight months, he said, almost Rs5 billion had been earned through the 30 trains.

“Some powers don’t want to see railway track up to Gwadar,” he said without taking any names. “I want to see China Pakistan Economic Corridor (CPEC) operational at the earliest.”

The minister said a decision has been made to set up some 1,000 stalls at railway stations and in this regard, tenders have been invited for the provision of tea to passengers in railcars at low rates.

To another query, he said all problems which the country was facing were actually caused by Nawaz Sharif and Asif Ali Zardari.

“All plunderers are about to form an alliance, but they would never get the National Reconciliation Ordinance (NRO),” he stated. “Prime Minister Imran Khan is facing all challenges on the frontline and he is making sincere efforts to overcome the prevalent economic crisis.”

People would now have to decide between those who had ruined the country in the past and those who were striving hard for the development and prosperity of the country, he concluded.