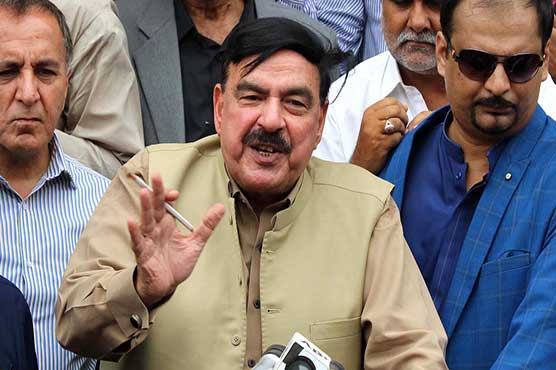 LAHORE: Railways Minister Sheikh Rasheed Ahmed said on Saturday he would quit politics if the circular debt of Pakistan Railways is not reduced.

Addressing a press conference at the PR headquarters, he said that funds have been obtained for Mainline-1, adding that funds were also available for Mother & Child Hospital in Rawalpindi and Nullah Lai, which would be completed soon.

He said for Rawalpindi, Lahore, Karachi, Hyderabad and Sukkur, the department is going to issue tenders for the launch of a high-speed train on the basis of build-operate-transfer (BOT) basis.

He said the work on the Command and Control System in Lahore would be completed within a month and people would be able to check the location of trains from the comfort of their homes.

Sheikh Rasheed said that a decision has been made to install trackers in freight trains and the department was going to connect 117 inquiry helpline with Ufone. “220 call centres of Ufone will be able to book tickets as well.”

He said Prime Minister Imran Khan would inaugurate Sir Syed Express on June 30th, although it was a tentative date. He hoped that the train would also get popular among passengers.

To a question, the minister said the PR earned a business of Rs400 million by opening its reservation offices for 24 hours. “Those who want to shoot dramas and movies at railway stations will be allowed to do so free-of-cost and if they intend to use any engine, wagon or other material, they will be charged as per the PR rules,” he added.

Responding to another query, the minister said that the railway department has a fuel capacity of 30 days, adding that the department also has oil depots in case of an emergency.

“As per the railway rules, the department should have fuel reserves for seven days, but we have it for 20 days,” he stated, adding that a decision had been made to increase the fare of freight trains by 10 per cent.

“We are going to manufacture freight wagons and passenger coaches,” he announced.

He said that 200 coaches were being gathered at Harbanspura workshop, and then after selection, maintenance work would be launched.

Responding to a question, he said the cases which the leadership of PML-N and PPP were facing had not been made by Imran Khan. “There will be no deal with them at all,” he asserted.

The minister said whoever has done wrong, the National Accountability Bureau (NAB) should take action against them.

To a question about the presidential form of government, he said no presidential system was coming in Pakistan.