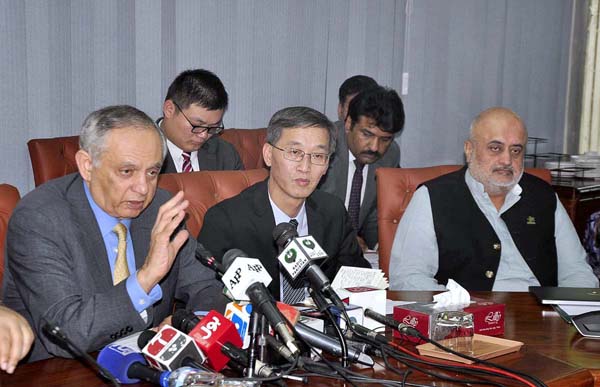 ISLAMABAD: Adviser to Prime Minister on Commerce Abdul Razak Dawood said on Friday that a Chinese company, Li & Fung, has expressed its intention to enhance its purchasing from Pakistan to up to $1 billion, adding that this would help promote industrial productivity.

Addressing a press conference along with Chinese Ambassador Jao Ying, he said Li & Fung was a 134-year-old company, enjoying a prominent market position across the world.

“The company has about 8,000 business houses across the world and it deals with both buyers and manufacturers,” the adviser stated. “Commencement of its operations in the country will equally benefit the vendors as well as manufacturers.”

He recalled that during a business summit that was held on June 17 and 18 in China, Li & Fung had expressed its keen interest to promote trade links with Pakistan.

The summit, in which a large number of Pakistani businessmen participated, was organised by the said company, the adviser informed, adding they (Li & Fung) had invited the Pakistani businessmen, in particular, to attend the conference and explore the existing opportunities in many areas of the economy.

“Pakistan is planning to materialise the trade and investment opportunities that had emerged after the finalisation of the Free Trade Agreement (FTA) with China and we are also formulating a proper way forward in this regard,” he added.

Dawood further informed that the representative of the company had met with Prime Minister Imran Khan during his visit to China when the FTA was signed between the two countries.

“The China National Textile and Apparel Council, which supports the small and medium enterprises in the textile sector, will also visit Pakistan to hold trade negotiations with local businessmen.

“I will also visit China around mid-July to meet with the Chinese commerce minister in order to further strengthen the bilateral trade and investment ties.”

He said after strong coordination between both the governments (China and Pakistan), the focus was now on strengthening the business-to-business contacts.

“A delegation comprising 17 to 18 businessmen from different sectors had visited China along with the prime minister on their own expenses and had interacted with their Chinese counterparts to explore the opportunities of joint ventures.”

The adviser said that the trade cycle with China has started to move in the right direction, adding that cooperation in the services’ sectors would also be promoted, as a delegation from China was due to visit Pakistan in September.

Speaking on the occasion, the commerce secretary said that the top 30 companies, including Chinese companies operating in Pakistan, had participated in the summit to share the investment policy of the country.

“The investors in the summit were also apprised about the fiscal infrastructure, investment opportunities and establishment of special economic zones (SEZs) in Pakistan,” he added.

The secretary said that the Chinese companies appreciated the physical infrastructure and expressed a keen interest to invest in Pakistan.

The Chines ambassador on the occasion said PM Imran Khan, in his three meetings with President Xi Jinping, had stressed the need to promote bilateral cooperation in trade, industry and agriculture sectors development.

He said a framework was being formulated to enhance the scope of bilateral cooperation, adding that 90pc of the Chinese market was open to Pakistani products.

“Several items, including sugar, fruits, mangoes and fish, have been given duty-free access to Chinese markets.”

SWAT: Swat Deputy Commissioner Junaid Khan said on Thursday that an amount of Rs5 billion has been allocated for the construction of a road...
Read more
HEADLINES