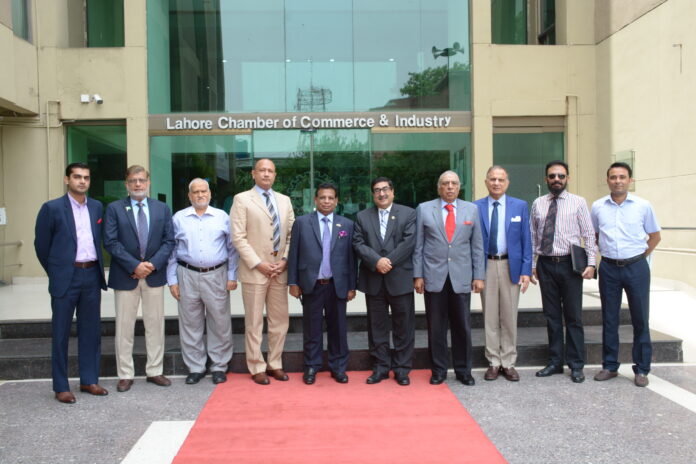 LAHORE: The Lahore Chamber of Commerce & Industry (LCCI), in collaboration with the Sri Lankan High Commission, organised a ‘catalogue show’ at its premises on Monday.

The very objective of the show was to form a liaison between the business communities of the two countries and to make way for mutual trade and joint ventures. Over a dozen Sri Lankan companies took part in the catalogue show.

Speaking on the occasion, the Sri Lankan high commissioner called for taking the volume of bilateral trade between Sri Lanka and Pakistan to a higher level.

He said that Pakistan has always supported Sri Lanka in adverse circumstances, adding that people of Sri Lanka have great honour for Pakistan.

He said that Sri Lanka and Pakistan have signed a Free Trade Agreement (FTA) but certain issues with regard to the agreement need to be resolved. “The agreement should be implemented and made beneficial for both countries.”

TDAP Director Riaz Ahmed said that Pakistan and Sri Lanka are members of the South Asian Association for Regional Cooperation (SAARC) and have strong diplomatic and trade relations since long. He said that Sri Lankan Catalogue Show has been organised to explore more trade opportunities.

LCCI Acting President Khawaja Shahzad Nasir encouraged the business communities of the two countries to keep on exploring the opportunities of mutual interest.

He said that business delegations, composed of sector-specific participants or product-specific group of entrepreneurs, should be organized regularly, adding that the business houses and diplomatic missions could always join hands to yield tangible results.

He said that LCCI was making all-out efforts to increase the volume of two-way trade between Pakistan and Sri Lanka.