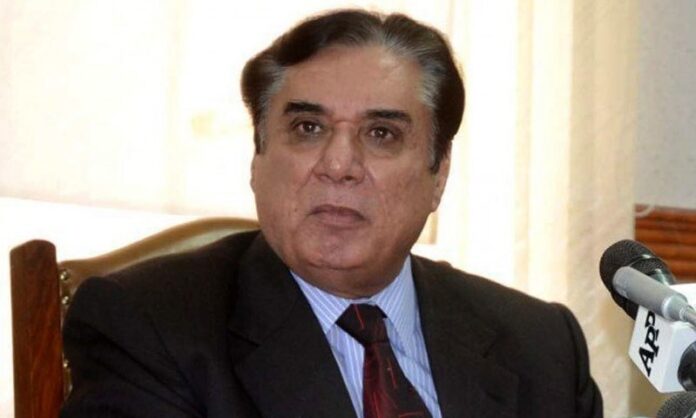 National Accountability Bureau (NAB) Chairman Justice (r) Javed Iqbal has announced that the bureau will not pursue cases pertaining to income tax or sales tax against members of the business community.

“The ongoing such cases against businessmen will be sent to the Federal Board of Revenue and notices recently issued to owners of flour mills by the anti-corruption watchdog’s Multan office are suspended with immediate effect,” a press release quoted the NAB chairman as saying on Friday. “I will personally look into the matter.”

Iqbal made the comments at the NAB headquarters during a meeting with a delegation of businessmen headed by Federation of Pakistan Chambers of Commerce and Industry President Daroo Khan Achakzai.

The NAB’s decision comes two days after Law Minister Farogh Naseem had announced that laws would be amended to strip NAB of the powers to take action against private individuals – particularly the business fraternity.

Special Assistant to Prime Minister Firdous Ashiq Awan, while addressing a press conference on Tuesday, had stated, “In the light of complaints of the business community against NAB, the federal cabinet discussed how the practice of arm-twisting and threatening of businessmen by some NAB officials can be thwarted.”

Speaking to the delegation on Friday, the NAB chief said that the business community is the backbone of the country and the anti-corruption watchdog acknowledged their services in progress and prosperity of the nation.

NAB is a business and human-friendly institution which accords priority in resolving issues of the business community, said Justice Javed while assuring the traders’ fraternity that they should not perturb over future actions of the anti-graft body.

“Businessmen who are striving for the betterment of the country’s economy and providing employment opportunities to hundreds of labours will not be harassed,” he added.

Iqbal said action is being taken against owners of private housing societies who had looted life earnings of the common people as some societies have not provided plots and amount to the poor and NAB is striving hard to recover the looted money.

Special desk has been established at NAB headquarters to address issues of the business community and the bureau would protect the interest of the country and traders who prefer the country’s interest instead of personal interests, he added.

“The country is under the billion of dollars debt and the borrowed amount was not spent on betterment of people. NAB is duty bound to make accountable those who plundered the country’s wealth.”

He went on to say that the prime objective of NAB is to improve the weak economy and recover billions of looted money to protect the interests of all segments of the society.