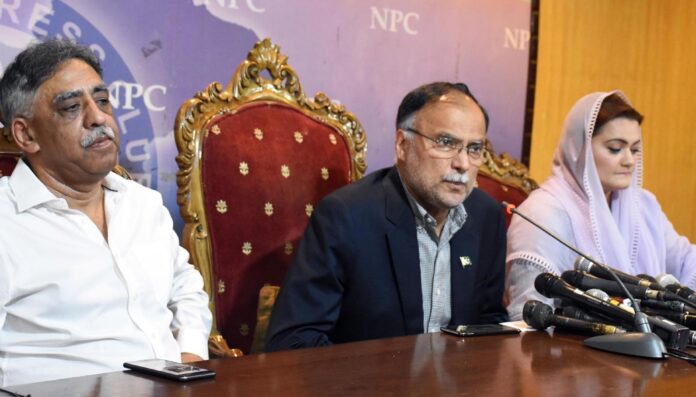 ISLAMABAD: The Pakistan Muslim League-Nawaz (PML-N) on Monday lashed out at the Pakistan Tehreek-e-Insaf (PTI) government, alleging that the regime’s ‘record financial blunders’ have pushed the country’s economy to the brink of bankruptcy.

Ahsan Iqbal said that any economy has three major indicators which identify its health and direction. He pointed out that the growth rate, fiscal deficit and inflation are these key areas and PTI has not just failed at sustaining previous numbers but has caused record degradation in all three.

He said the situation of the fiscal deficit was equally alarming as it grew by a 3.9 per cent over a single quarter which too is recorded deficit in 40 years. Ahsan pointed out that the last time the deficit was this large was when mass development projects were underway which made some sense but this government had not laid a single brick of development and yet it has damaged the economy with a sharp 3.9 per cent fiscal deficit hike over three months.

Iqbal said that inflation has shot through the roof from three per cent to over 13 per cent which is catastrophic when coupled with low growth and fiscal deficit. He pointed out that the State Bank of Pakistan (SBP) had exposed PTI’s claims of cutting down import by mentioning that the decrease was because the heavy machinery imported for CPEC projects had been completed, not because of routine import reform.

She said that despite record borrowing, record development cuts, record inflation, record tax hikes, record rupee devaluation the regime could not achieve its own set targets which should be enough for a shameful administration to resign if they love this country and not just their lust for power.

She said from the farce of austerity to the deception of accountability, the double standards of Khan’s regime are staggering. Calling for accountability of Lahore, Multan and Rawalpindi metro while staying mum over trillion rupee corruption of Peshawar Metro and spending Rs1,100 billion more than any past government on its own expenditure while conjuring up a circus of austerity is the signature of PTI’s hypocrisy, she said.