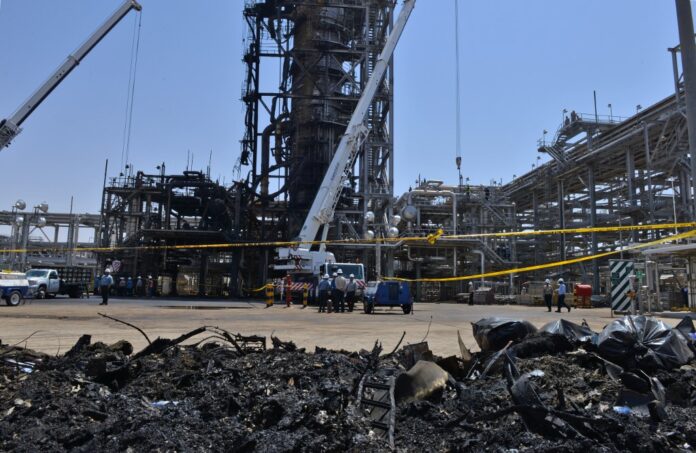 KHURAIS: Saudi Arabia vowed Friday oil production will be quickly restored as it revealed extensive damage to the Khurais oilfield following weekend aerial strikes, which have been blamed on Iran by Washington.

The weekend attacks, which hit Khurais and Abqaiq — the latter the world’s largest oil processing facility — were claimed by Yemen’s Huthi rebels.

But the US has blamed Iran, condemning an “act of war” which knocked out half of Saudi’s oil production.

At the Khurais plant in the east of the kingdom, charred pipes and supports were flanked by cranes as staff assessed damage on Friday, some six days after the assault.

In a site visit giving rare access to the nerve centre of the world’s largest oil producer, state oil giant Saudi Aramco flew in journalists to show the extent of damage and the ongoing clean-up.

“We will have production at the same level as before the strike by the end of this month — we are coming back stronger,” asserted Fahad al-Abdulkareem, a general manager for Saudi Aramco.

He said there were as many as 300 people on-site at the time of the aerial strikes early on Saturday morning.

“The whole thing… happened, with four strikes and explosions, with no single injury to any (staff)”, he said, as he inspected damage.

Badly warped thick metal piping — peppered with shrapnel during the aerial strikes — lay strewn around the area of the attack.

But Abdulkareem said that 30 percent of the Khurais plant was operational within 24 hours of the initial strikes.

Tehran has denied responsibility for the attacks against Khurais and the Abqaiq facility 200 kilometres (125 miles) northeast, raising the spectre of “all-out war” in the event of retaliatory measures by Washington or Riyadh.

The rhetoric has raised the risk of an unpredictable escalation in a tinderbox region where Saudi Arabia and Iran are locked in a decades-old struggle for dominance.

US Secretary of State Mike Pompeo said Thursday there was “enormous consensus in the region” that Iran executed the attacks, despite its denials and the Yemeni rebels’ claims they were responsible.

The Huthi rebels are backed by Iran in Yemen’s conflict, while a Saudi-led coalition backs the internationally recognised government.

Pompeo’s intervention followed meetings with allies in Riyadh and Abu Dhabi after which he also said the US was intent on finding a way out of the confrontation.

Saudi officials this week unveiled what they said were fragments of 25 drones and cruise missiles fired at the two oil facilities on Saturday.

“The attack was launched from the north and unquestionably sponsored by Iran,” defence ministry spokesman Turki al-Maliki said, although he refused to be drawn on whether Saudi officials believed Iran directly carried out the operation.

“We don’t want war,” he told CNN in an interview aired Thursday, “but we won’t blink to defend our territory.”

Yemen’s Huthi rebels have previously hit dozens of targets in Saudi Arabia, and their rapidly advancing arsenal has exposed the kingdom’s vulnerability despite its vast military spending.

US, French and Saudi officials have disputed their claims, insisting they do not have the capability to mount such an advanced, coordinated strike on the Gulf’s regional powerhouse.

Huthi rebels have also threatened strikes on the United Arab Emirates, a key member of the Saudi-led coalition fighting the Shiite rebels.

“If you want peace and security for your facilities, and towers made of glass that cannot withstand one drone, then leave Yemen alone,” the group said, apparently referring to the skyscrapers that fill the cities of Dubai and Abu Dhabi.

The Huthis accused Saudi Arabia and its allies on Friday of endangering a fragile truce around Yemen’s Hodeida port with strikes on four rebel targets north of the key aid gateway.