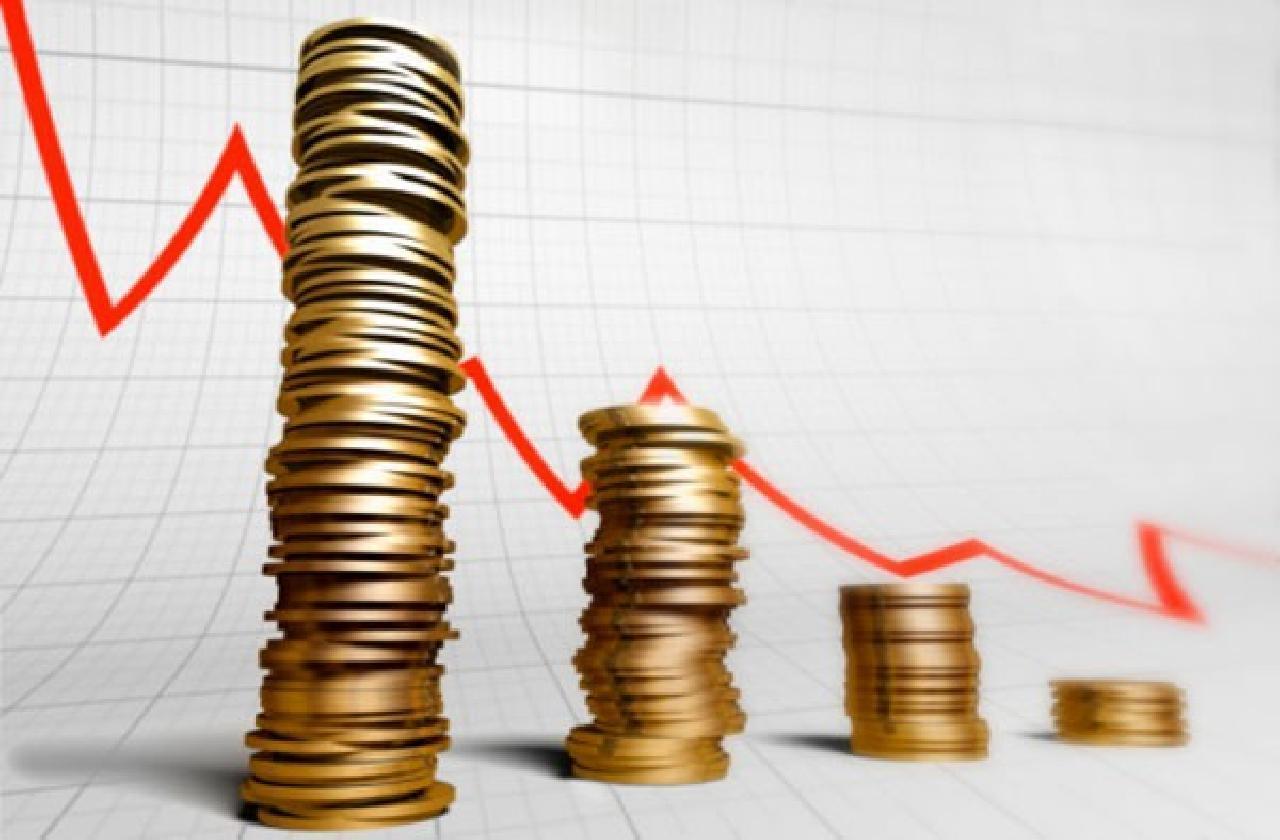 It is a slow time in the packaged food industry as the combined effects of a massive currency devaluation and rising inflation ripple through the economy. Companies in the sector find themselves unable to pass on the effects of their rising costs to consumers, leading to a hit to their profitability.

In the first half of calendar year 2019, publicly listed packaged foods companies saw their gross margins decline by 425 basis points (one basis point equals one hundredth of one percentage point) to 24.75%, according to an analysis by JS Global Capital, an investment bank.

“Cost push inflation continued to shrink gross margins by 425bps year-over-year to 25% as we believe food companies prefer volumetric increases over price increases by passing incremental costs to the end consumer,” wrote Amreen Soorani, JS Global Capital’s deputy head of research, in a note issued to clients on September 29, 2019. Soorani’s analysis examined the effects of the slowing economy on 10 of the largest consumer food companies.

Soorani also found that packaged food companies were struggling to grow their sales. Revenue growth for the industry stood at an anemic 2.7% in the first half of 2019 compared to the same period last year, suggesting that companies were perhaps well-advised in their strategies to not pass on their cost increases to consumers.

Market analysts use gross margins as a proxy for the pricing power of a company. In a market like Pakistan, where packaged food remains a small fraction of the overall market – in most segments, not exceeding 10% of total consumption – while individual companies may have strong brands and good market share within the packaged food space, they remain in a highly competitive overall food market where each company’s share is miniscule.

For example, FrieslandCampina Engro Pakistan and Nestle Pakistan are a virtual duopoly in the packaged milk business. But both companies combined – along with every other packaged milk company – account for less than 8% of all milk consumed in Pakistan. So while each company can claim close a 40% market share, each company accounts for approximately a 3% market share in the overall milk market in Pakistan. 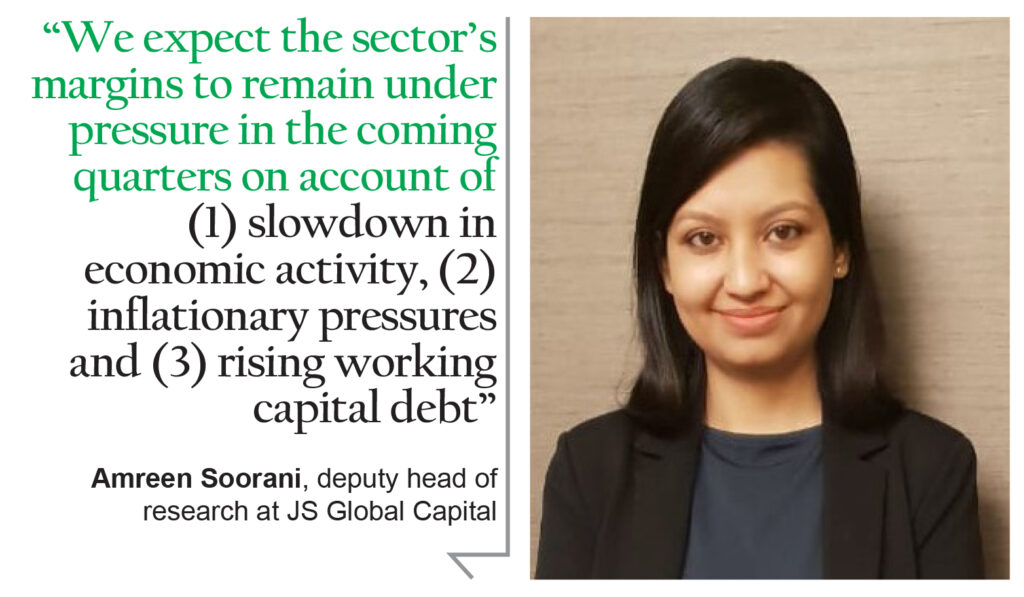 In addition, while decades of advertising may have convinced at least a portion of the Pakistani public that packaged milk is more hygienic and nutritious than unpackaged milk, the vast majority of the public remains either unconvinced, or else at least unwilling to spend the extra money it takes to buy a carton of milk rather than running down to the local milk shop and getting a litre of milk in a thin, clear plastic bag.

That means, effectively, that the market for packaged food is not differentiated from that of unpackaged food, particularly for basic items like dairy products. And in such a massively fragmented market, where he closest thing to perfect competition exists, every individual seller of milk – whether it be global food giant Nestle or the local milkman – is a price-taker.

No individual company has the ability to set the market price, and hence when consumer spending ability declines due to the economic slowdown, packaged food companies cannot protect their margins and are forced to absorb the increases in their cost of production.

Paradoxically, this means that the larger food companies are actually shielding consumers from how bad inflation might be if they raised their prices in accordance with their cost increases.

Not all of the news for the industry was bad, however. It appears that while nearly every company faced gross margin compression, the slowdown in revenue may be concentrated in Nestle Pakistan, which saw its revenues decline by 7.7% in the first half of 2019, compared to the same period last year.

Excluding Nestle’s decline, the packaged food industry saw its revenues increase by a healthier 13% in the first half of 2019 compared to the same period last year.

Indeed, Nestle Pakistan and Fauji Foods were the only two companies among those analysed that saw a decline in revenues. The rest saw increases in revenues, ranging from a meagre 2% for National Foods to a significant 39% for At-Tahur Ltd.

Margin compression, however, was a story that virtually all companies shared, with only two bright spots. “At-Tahur was also one of the only two companies (the other being Matco Foods Ltd , which saw a 73 basis points increase year-on-year in its gross margins) that managed to expand its gross margins (up 105 basis points year-on-year) during the same period,” wrote Soorani. 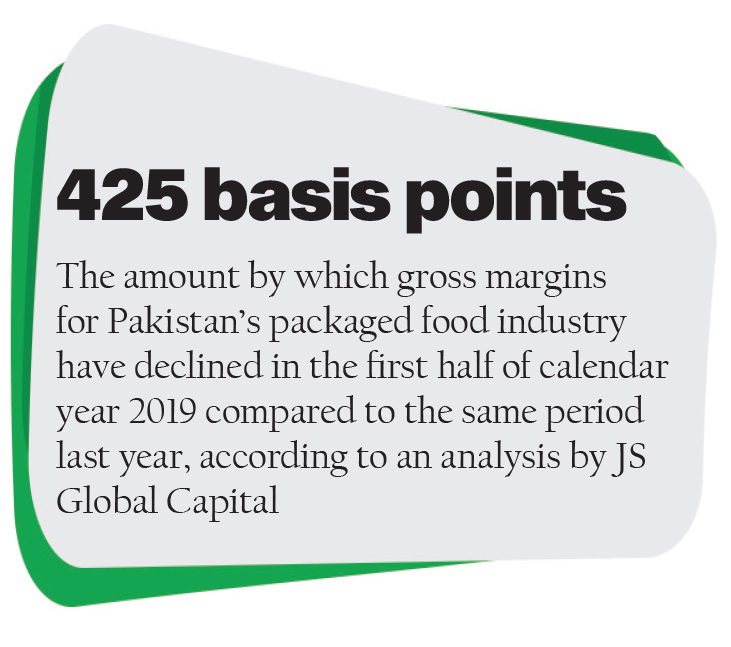 Analysts a JS expect the sector’s profitability to remain muted over the coming year, however.

“We expect the sector’s margins to remain under pressure in the coming quarters on account of (1) slowdown in economic activity, (2) inflationary pressures and (3) rising working capital debt,” wrote Soorani.

That depressed performance in both revenue growth and margins has impacted stock prices of the publicly listed packaged food companies as well, with the sector lagging the broader equity capital markets. While the benchmark KSE-100 index has declined by 9% over the first half of calendar year 2019, stocks of food companies are down an average of 22% during the same period.