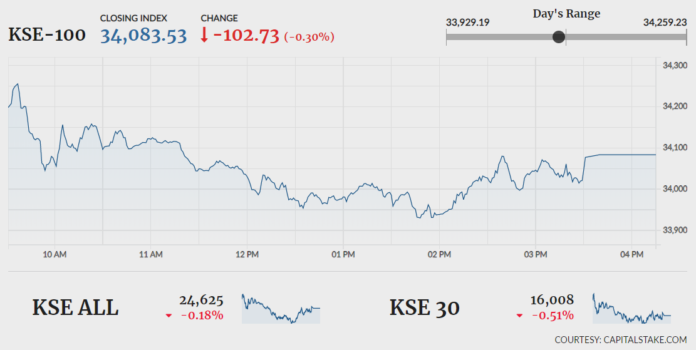 KARACHI: Bearish trend prevailed at the Pakistan Stock Exchange (PSX) on Tuesday, as the investors remained anxious ahead of the Financial Action Task Force’s (FATF) review. Foreign investors were net buyers on Monday, with a net inflow of $0.856 million.

As per media reports, the FATF on Monday had expressed satisfaction over steps taken by Pakistan to control terror financing and money laundering. The Pakistani delegation, headed by Economic Affairs Minister Hammad Azhar, had presented its case before the financial watchdog on the measures taken by Islamabad.

The Paris-based body is reviewing the progress made by Pakistan until April this year. The meeting, which began on October 13, will conclude on October 16. The review will determine if Pakistan stays on the grey list or moved on the blacklist or given a clean chit.

Meanwhile, a technical team of the International Monetary Fund is currently on a visit to Pakistan in order to review the measures taken by the government. Both sides will discuss ways to increase overall tax collection by Rs700 billion, particularly through income tax and sales tax.

Moreover, Habib Bank Limited (HBL +0.44pc) declared earnings per share of Rs3.19 for the third quarter of FY19, as compared to Rs0.99 in the same period last year. The company also announced an interim cash dividend of Rs1.25.