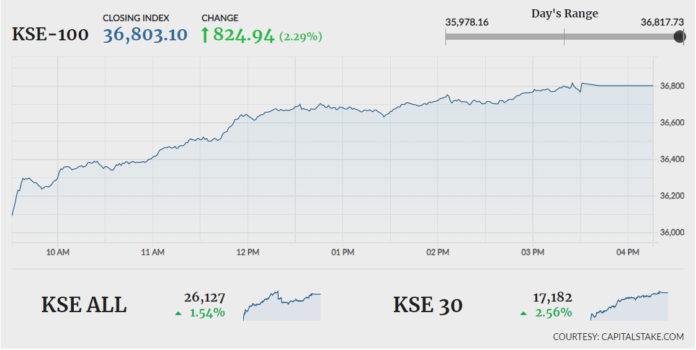 KARACHI: Continuing with the growth momentum for the eighth consecutive session, the Pakistan Stock Exchange (PSX) ended positively once again on Monday, with the KSE-100 Index accumulating over 800 points.

On the economic front, the International Monetary Fund (IMF) team has expressed satisfaction over Pakistan’s performance on the loan programme.

The government has approved a package for electricity supply mainly to the industrial sector at a flat rate (Rs11.97), which will be lower than the normal tariff, in an attempt to boost production, said Minister for Power Omar Ayub Khan.

The government reduce capacity payments worth billions of rupees to the power producers, especially the private sector.

Moreover, Sazgar Engineering Works Limited (SAZEW -0.38pc), in a notification to the exchange, announced its production and sales figures for the month of October 2019. According to the notification, 1,258 units were manufactured while 1,098 units were sold.