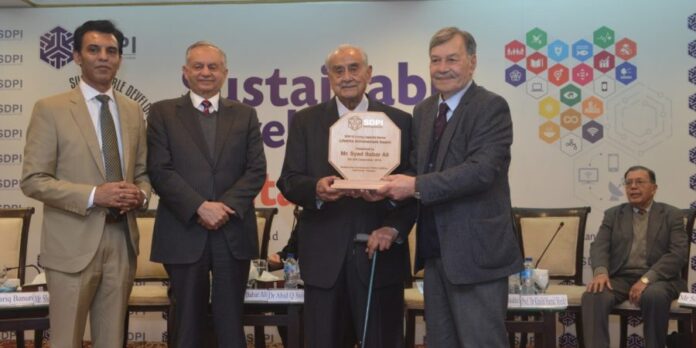 The 93-year old business tycoon is the founder of Packages Limited, Nestlé Pakistan Limited and Lahore University of Management Sciences, and has also served as a caretaker finance minister of Pakistan in 1993. He has also been awarded the Order or the British Empire (OBE).

Speaking on the occasion, Syed Babar Ali said that he enjoyed every moment of his life and that he wishes to continue his pursuit for the rest of his life. SDPI Executive Director Dr Abid Qaiyum Suleri presented him the ‘Living Legend’ shield in recognition of his meritorious services for humanity.

Adviser to Prime Minister on Commerce and Industry Abdul Razak Dawood said that the country has a dearth of people who have a sense of commitment, character and humanity to make a difference and contribute to the society. “It’s not the number of years Babar Ali lives, it is the number of hearts that he touched and he touched my heart too.”

Higher Education Commission Chairman Dr Tariq Banuri said that the true history is constituted by those people who made and built this country through their matchless contributions, and they are the real heroes. “Babar Ali is among those living legends.”

Meanwhile, speaking at a concurrent session titled, “Ease of Doing Business in Pakistan: A Case for Tax Harmonisation”, experts called upon the government to decentralize, devolve and delegate the tax authorities and its administrative functions at district level.

Former FBR chairman Dr Muhammad Irshad said that lack of harmonization among different tax institutions at federal and provincial levels is the major impediment for the businesses to grow. “Unless different tax and revenue collection authorities integrate and harmonize their efforts, the challenge of revenue target will remain unresolved.”

Speaking at a separate session titled “Digital Financial Inclusion: Challenges and Opportunities”, PPP MNA Syed Nadeem Qamar accused the banks of discouraging people in using electronic money transfer by imposing high taxes. He said that change in public behaviour is the only challenge in the way of financial inclusion.

“The government policies and difficulties in account opening procedures have financially excluded a larger population, especially the old age people and women.”

Nadeem Hussain, the Founder of Easypaisa, said that there are enough elements in place to make Pakistan completely digital, adding that just like any other country of the world, Pakistan has also moved forward in terms of technology and prosperity. “We need to appreciate ourselves what we have done so far specifically in the field of digital inclusion.”

Speaking at a panel discussion titled “Role of women in Media and Digital Society”, Dr Nathalene said women should get space without compromising the system initially and there should be strong legislation to punish people who cross the limits.