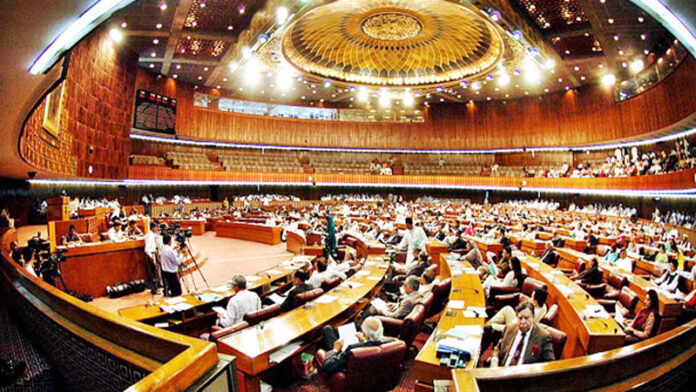 The committee members showed annoyance over the government’s move to include “economic crimes” and “illegal money transfers” in the Anti-Terrorism Act (ATA), saying that the new law “could be used by the government for political victimisation”.

Earlier, the NA body was informed that amendments in the ATA 1997 have been proposed to facilitate certain requirements of FATF so that those accused of terror financing could be tried in anti-terrorism courts.

Briefing the NA committee, an interior ministry official stated that certain amendments [in ATA] were essential in the wake of FATF requirements, which were earlier included in the anti-money laundering laws.

He said the ATA lacked the definition of “agent”, “economic terrorism” as well as provisions regarding “detention of those involved in economic crime for inquiry”.

The committee was informed that the proposed amendments would further enhance the applicability of ATA in cases pertaining to the transfer of money through informal channels, including hawala and hundi.

“Besides, a new section 9 (A) has been inserted that allows federal and provincial authorities to detain any accused person for inquiry as well as to review the applications of aggrieved persons against the detention orders,” the official informed.

Explaining the amendments, the officials of FATF cell in law ministry told the committee that the definition of “economic terrorism” meant transfer of money or funds from Pakistan to destinations abroad through any informal channel, including hundi or hawala, where the total amount transferred by an agent, through a single or multiple transactions within one month, was equal to or exceeds Rs50 million.

The amendments highlighted that detention of those accused of “economic crime” would be authorised through a specific or general order passed by the interior secretary or the home secretary of the province.

As per the officials, the amendments allowed detention up to three months, and that a police officer, equivalent to the rank of SP or senior, could conduct the inquiry.

Following the briefing on the amendments, the first objection was raised by PPP MNA Abdul Qadir Patel, followed by PML-N’s Pervaiz Malik. They believed that the amendments could be used for political victimisation.

While the officials requested that the amendments may be approved as it were the requirements of FATF, committee chairman Raja Khurrum Shazad deferred the bill and directed the interior ministry to club all the ATA-related amendments.

Meanwhile, the committee approved a private member bill moved by Sanaullah Khan Mastikhel to abolish interest-based loans by non-registered persons. The jurisdiction of the bill was within the limits of Islamabad district only.