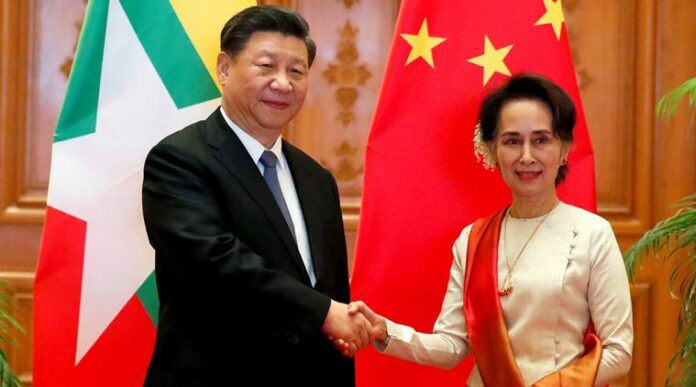 NAYPYITAW: China and Myanmar inked dozens of deals on Saturday to speed up infrastructure projects in the Southeast Asian nation, as Beijing seeks to cement its hold over a neighbour increasingly isolated by the West.

But no major new projects were agreed during the two-day visit by President Xi Jinping, the first of any Chinese leader in 19 years. Analysts said Myanmar was generally cautious of investments by Beijing and was also being careful ahead of elections later this year.

They agreed to hasten implementation of the China Myanmar Economic Corridor, a giant infrastructure scheme worth billions of dollars, with agreements on railways linking southwestern China to the Indian Ocean, a deep sea-port in conflict-riven Rakhine state, a special economic zone on the border, and a new city project in the commercial capital of Yangon.

They did not address a controversial $3.6 billion Beijing-backed mega-dam, where work has been stalled since 2011, reflecting the contentiousness of Chinese investment in Myanmar, where many are uncomfortable with the sway Beijing has over its smaller neighbour.

“While a large number of different agreements have been signed, there is no Big Bang here,” said Richard Horsey, a Yangon-based analyst with the International Crisis Group.

“The overall impression is that Myanmar is being cautious about Chinese investment, especially ahead of elections planned later in the year, he said.

“China will be hoping that this is an incremental step towards realizing its mega-infrastructure goals, and that further progress can be locked in over the coming months,” he said.