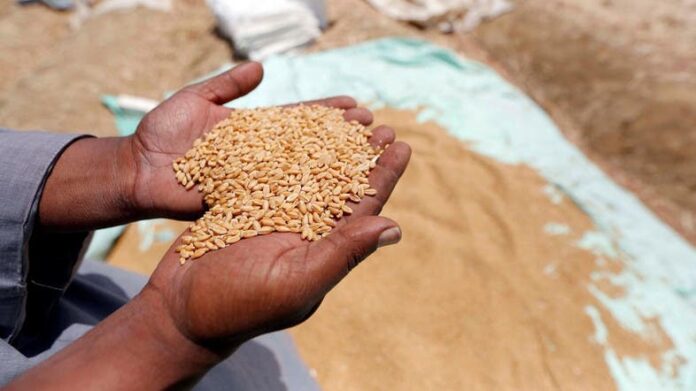 –ECC allows wheat to be imported till March 31; first shipment to arrive by Feb 15

–Sindh govt to buy 0.4m tonnes of wheat from PASSCO to overcome shortage

ISLAMABAD: The Economic Coordination Committee (ECC) on Monday approved the import of 0.3 million tonnes of wheat without regulatory duty amid an unprecedented price hike and country-wide shortage during the past few days, as criticism continued to mount on the federal government.

Chaired by Adviser to the Prime Minister on Finance Dr Abdul Hafeez Sheikh, the committee has allowed for wheat to be imported till March 31, with the first shipment due to arrive by February 15.

It has also asked the Punjab government and the Pakistan Agricultural Storage and Services Corporation (PASSCO) to release wheat stocks in order to overcome a country-wide shortage.

A statement issued by the Finance Ministry said that Punjab and PASSCO have approximately 41 tonnes of wheat stocks available.

It is not yet clear from which country or countries Pakistan will be importing the wheat.

During the meeting, the government also approved the Gas Infrastructure Development Cess (GIDC) waiver of Rs400 per bag on urea to ensure the supply of cheap fertiliser to farmers.

Meanwhile, the Sindh government, which did not procure wheat from its growers in 2019, has decided to purchase 0.4 million tonnes of wheat from PASSCO to overcome the wheat crisis in the province.

The Sindh government did not procure wheat from the growers in the province citing financial crisis and availability of carry-over wheat last year.

In a related development, the Punjab government on Monday decided to dispatch 5,000 tonnes of wheat to Khyber Pakhtunkhwa on a daily basis.

Addressing a meeting in this regard, Punjab Chief Minister Usman Buzdar said that the Punjab government will provide wheat from its stock as a goodwill gesture to help overcome the flour shortage in KP. He also directed to continue steps for stabilizing the price of flour, adding that unjustified increase in the price of Chakki flour will not be tolerated and assured to take necessary steps in this regard.

The meeting was told that the food department inspected 1,119 flour mills and took action against 542 mills by suspending their wheat quota. Similarly, 88 flour mills’ licenses have been suspended and fine of Rs140m has been imposed.

Meanwhile, senators belonging to the opposition parties on Monday criticised the government for the wheat shortage and rising prices of essential commodities in the country.

“This issue concerns the people of Pakistan,” said Senator Sirajul Haq, the chief of Jamaat-e-Islami, during Monday’s session. “Pakistan is an agricultural economy,” he said, adding that it is the eighth-largest wheat producing country in the world. “Despite this, the people of Pakistan are desperate for roti [bread],” lamented Haq.

“What is cruel is that a federal minister, standing among people, says that people eat more bread in November and December, which has caused the [wheat] shortage,” said Haq. “Do these people have hearts of stone?” he questioned, adding that the minister had made a joke out of the people of Pakistan.

Haq was referring to Federal Railways Minister Sheikh Rasheed’s remarks at a press conference on Saturday, where he was asked about the wheat shortage. “In November and December, people eat more bread than usual,” Rasheed had said, eliciting laughter from the room. “It’s not a joke, a study backs my claims,” he had added.

During the Senate session, Haq and other senators censured the government for Rasheed’s remarks. “The world is making fun of us, saying people have walked on the moon and in Pakistan, people are waiting in lines for a bag of wheat.”

Haq’s comments were echoed by Senator Usman Kakar of the Pashtoonkhwa Milli Awami Party (PkMAP), who questioned who was responsible for the crisis. “The main culprit is the anti-people government and those who have imposed it on the people,” said Kakar. “They have made life difficult. People haven’t voted for them, which is why they are continuously punishing people,” he added.

Kakar lamented that the prices of all essential commodities had increased by around 13 per cent to 15pc on average, while some items were being sold for up to 200% more than the previous price. “Naan [bread] was sold for Rs20 in Quetta, but is now being sold for Rs40,” he said.

“And then you are even making fun of the people,” he said, referring to Rasheed’s remarks. “The opposition should take a stand against the government until they apologise to the people,” said Kakar.

On Sunday, the opposition and Centre had continued to bicker over who was to blame for the fast declining wheat reserves in the country.

While the PTI had laid the blame squarely on the Sindh government, citing untimely purchasing and a subsequent shortage in supply to the flour mills, the Sindh government had taken exception to being the target of “a dirty blame game” and in turn held the prime minister responsible.

Meanwhile, the PPP and PML-N had alleged that despite a shortage in reserves of wheat, the commodity had been exported.

Further, leader of the Opposition in the National Assembly Shehbaz Sharif had demanded an inquiry to determine who had authorised the move.