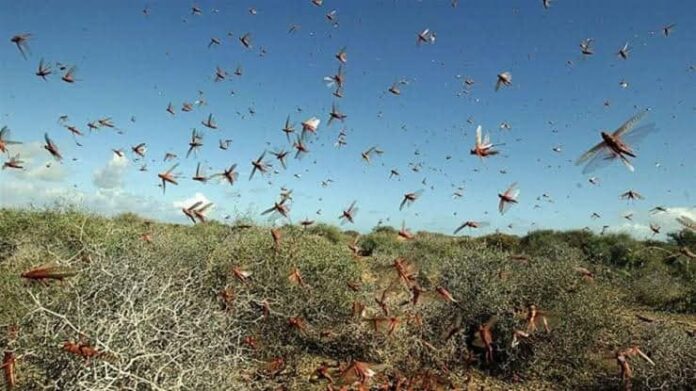 ISLAMABAD: The Ministry of National Food Security & Research (MNFS&R) is weighing the option to seek the army’s help to protect and safeguard crops from locust attack.

According to sources, the MNFS&R officials recently held a number of meetings with concerned stakeholders to chalk out ways to protect crops from Indian locusts, as a number of them came into Pakistan from India.

“Recently, the locusts severely damaged the crops in 13 districts of India. We fear that they [locusts] can damage our lands spreading over the 300,000sq.km,” a ministry insider told this scribe. “The ministry will not only request the army to spray protect the crops, but also to help train the pilots of the plant protection department so that active surveillance could be insured in the coming months.”

Locusts survive due to the lack of air spray. In addition, they attack crops in winters and summers as there is excessive rain in these months.

According to sources, special skills are required for efficient air spray and if the pilots do not conduct the activity properly, then the chances of losing the crops are high.

The ministry had earlier written three letters to provinces to ascertain the losses caused by the locusts in recent months. However, the ministry did not receive a reply in this regard. The ministry had also asked the provincial governments to take precautionary measures to protect wheat crops from locusts.

In addition to this, the ministry had decided to conduct a consultation session under the supervision of the Prime Minister in which all the stakeholders would be invited and the ministry would brief them about the threats of crops from locust.

The ministry will also brief the PM about the short and long-term plans to save crops from locust attacks,” the ministry insider said.

“Under the short-term plan, the ministry would suggest renting an aircraft on rent. We have also written to the Chinese government to take aircraft but they have not replied so far,” he said. “Under the long term plan, the ministry would also suggest to PM to purchase eight aircraft for spraying purposes. Presently, we have three aircraft, one is out of order while two are working.”